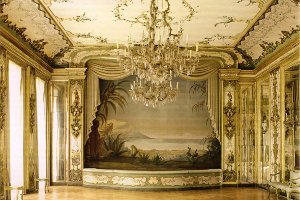 What would a trip to Paris be without perfume? While I’ve been in Paris, I’ve spent time with Denyse Beaulieu of Grain de Musc, who kindly wrangled me a few perfume-related press invitations. In this post, I’ll give you an overview of a few of these doings, with real reviews to come over the next few weeks.

Jean Patou: To launch Jean Patou Joy Forever, Patou set up one-on-one meetings for journalists with a company vice president and Patou’s new nose. Denyse and I went to Patou’s tiny storefront on the rue de Castiglione and were ushered upstairs to a reception room just big enough to hold a desk and a table with tea and plates of jasmine and rose macarons from Pierre Hermé.

Big changes are happening at Patou. First, Procter & Gamble sold the brand to a family-owned company in 2011. The new company brought in a new perfumer, Thomas Fontaine, who orchestrated the re-releases of Chaldée, Eau de Patou and Patou Pour Homme. Next year, they plan to release Amour Amour, Que Sais-Je and Adieu Sagesse. I smelled the new Chaldée, and it rang true to my memory of the Ma Collection bottle I have at home. I haven't tried the newest versions of Joy and 1000, but the executive we talked to said they'd upgraded the raw materials used since Proctor & Gamble's watch.

After talking to the company executive, we descended a steep and narrow staircase to the Patou perfume laboratory in the basement. The laboratory consisted of a modest conference room with a small table and chairs and an adjoining kitchen-like room with a perfume organ on three shelves arranged as a horseshoe. Nearby was a desk and a few small refrigerators for materials. (Fontaine let us sniff the iris concrete — two grams and 200 euros worth of heaven.) I learned that there’s no civet at all in Joy. None. Joy’s animalic whiff comes from the indolic jasmine.

Memo: Memo launched its latest fragrance, Italian Leather, at a coffee reception at the Italian embassy. The Italian embassy is an early 18th-century mansion behind one of the stolid walls on rue de Varenne — you know, the walls tourists like me walk by while scheming how to peek inside. This time, I made it in.

In the Grand Salon, we sat on butter-yellow silk armchairs and listened to the brand’s owner talk about driving through Italy and her inspiration for Italian Leather, while the perfumer, Aliénor Massenet, described its notes, including the tomato leaf accord she included. The event was set up as an open house. Chic beauty editors came and went, and a waiter brought coffee and pastries to the clutch of women surrounding the perfumer and owner.

It was hard to pay attention, though, surrounded by gilded boiserie, chandeliers, and a view of a lovely, long garden with a mirrored sculpture shaped like an oval pond intended to reflect moonlight. On one end of the central wing was a small, dim library with green and blue watered silk furniture. On the other side of the wing was a colorfully baroque theatre imported from Sicily. We left through a marbled entrance hall with a massive staircase and urns of flowers.

Jovoy: Just down the street from Patou is niche perfume heaven in the form of Jovoy. At Jovoy, you can get samples of anything from the store’s approximately 60 brands. The owner, François Hénin, has a little bit of Stephen Fry about him. He's charming enough to sell ice to Eskimos, so hang on to your credit card. By chance, I met Elisabeth de Feydeau as she left the store. (Apparently, besides being a perfume scholar, she makes a line of candles, which Jovoy carries.) It’s a relaxing, low-key boutique, and it’s unintimidating to visit no matter how terrified of French sales assistants you might be.

Nose: Nose is another boutique specializing in niche perfume lines — it carries more than 45 of them. I got to sniff Etat Libre d'Orange's new fragrance, La Fin du Monde, which, although it didn't smell the same at all, reminded me stylistically of Like This. One of the fun things about Nose is its computer tool to recommend fragrances. You can use the tool on Nose’s website, or a sales associate will lead you through it on an iPad. Plus, Nose’s neighborhood is a great one for window shopping and stopping for a coffee.

I wish you all could have been with me! Second best, though, is that I gathered perfume swag to share with Now Smell This readers. Keep your eyes open in the coming weeks for giveaways.

Note: top image is the Teatro siciliano at the Italian Embassy in Paris, via their website.