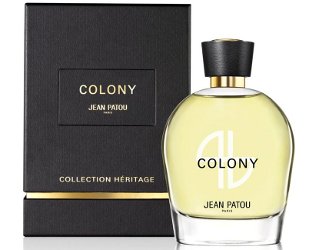 There is now an uneasy feeling in France. The sky grows dark and rumours of war are abroad. There is a longing to be somewhere else. People dream of a warmer sun and wider horizons. As if in answer to these dreams and longings, Jean Patou produces a new scent, Colony — a scent evocative of sun-ripened fruit, the melting aroma of spices and the blue-black manes of Creole girls.

This is the description of Colony, launched in 1938, from the booklet that accompanied the 1984 Jean Patou Ma Collection set of minis of old Patou fragrances, including Colony. To me, it’s a good description of the Ma Collection Colony (assuming that Creole girls’ hair smells like pineapple, of course). I’ve never smelled the original Colony, developed by perfumer Henri Alméras.

The press release accompanying this year’s Jean Patou Héritage Collection reissue of Colony informs us that “The new fragrance will be a modern adaptation of the historic Colony scent.” Reading this sent shivers down my neck. Would Colony be tarted up for the mall set? Turned musky-woody like so many awful “new chypres”? I shouldn’t have worried. Today’s Colony smells less like sun-ripened fruit and warmer sun, but surprisingly more vintage and more classically French than the Ma Collection Colony. It’s still Colony and still a Josephine Baker-like scent, but now it’s more akin to Baker’s sophistication than to her banana-skirt side.

Patou’s former house perfumer Jean Kerléo rebuilt Colony for Ma Collection. Its notes include pineapple, ylang ylang, carnation, iris, vetiver, opoponax, leather, musk and oakmoss. I have some of the Extrait, and it’s an unctuous pineapple fragrance with a sweetness barely tempered by spice and moss and lightened only a smidgen by its floral notes.

In Luca Turin’s 1994 Parfum Le Guide, he described the Ma Collection Colony as “jubilant et impétueux” and a fragrance “…qui fait penser à une beauté blonde qui se retiendrait d’éclater de rire.” (My lame French translates that as “..which makes you think of a blond beauty who holds herself back from bursting into laughter.”) He also said it would be good for a woman who likes Caron Royal Bain de Champagne but wants something to wear with an evening gown.

I agree that the 1984 Colony is joyous and wacky, and I cherish the bottle of Extrait I have. But it’s also thick, bordering on syrupy, and a sometimes unsettling edge of vetiver keeps it in check. Yet for all its body, the Extrait peters out after about four hours on me.

House nose Thomas Fontaine reformulated Colony for the Héritage Collection. Patou classifies it as a “green fruity floral.” This newer take on Colony is more sheer and diffuse than the Ma Collection version, yet earthier and infused with moss to the point of an almost sulfuric tang.

Colony’s pineapple is definitely present, but it’s dryer and greener than the canned Dole fruit in the Ma Collection take. An animalic touch decisively separates it from ambrosia salad. A clean shaft (orange blossom?) rises through the middle of the composition, but thanks to Colony's dryness never drags the perfume too far over on the laundry-fresh meter. All in all, this Colony feels more expansive and balanced — and older in style, even — than the Ma Collection version.

Colony lasts at least six hours on my skin. It wears stealthily. The first day I wore it, my acupuncturist returned to the room half an hour after sticking me head to toe with needles and said, “I like your perfume. I didn’t notice it last time, but it’s nice.”

I suppose the ultimate pineapple perfume collection would have both versions of Colony, plus L’Artisan Parfumer Ananas Fizz.

Have any of you smelled the original Colony? How does it compare to the Ma Collection and Héritage Collection versions?

Jean Patou Héritage Collection Colony Eau de Parfum is $245 for 100 ml. For information on where to purchase it, see Jean Patou under Perfume Houses.