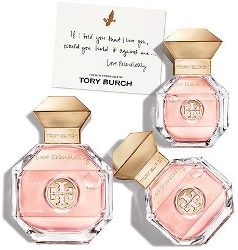 'If I told you that I love you, would you hold it against me?'

My father wrote this note to my mother, which he ran in the newspaper and signed 'Love, Relentless.' — Tory Burch

This list includes quite a few notes that I normally avoid, but nothing that irks me as much as the grammatical errors in that promotional copy: the vague pronoun reference of "it" and the dangling "which" (did her father run her mother in the newspaper?), not to mention the story itself, which more than a few of you found pushy rather than romantic when we announced this fragrance a few months ago.

So: I'm annoyed by the writing, I don't care for pear or lychee or pink pepper, and I don't covet any Tory Burch clothing or accessories. Her aesthetic, which has been described as "bright and poppy and relentlessly optimistic,"1 is a cleverly updated mash-up of Lily Pulitzer, David Hicks and J. Crew, i.e., not my style at all.

However, Love Relentlessly is perfectly pitched for wearers of Burch's $225 Reva flats (the ones with the huge goldtone medallions) and sporty separates. It's a pink-smelling, pink-tinted juice in a logo bottle. It has fruity and flowery and sugary notes. It's sheer yet long-lasting, and it smells sort of like a walk through a candy shop. Its opening is a sweet-and-tart mix of sharp lemon and grapefruit with a touch of something powdery. (I actually like this phase of the fragrance.) Then it goes more sour and orange-y, like a piece of hard candy that would make your mouth pucker a bit. The dry down is a familiar strawberry-and-vanilla confection that harks back to Estée Lauder Pleasures Delight (although it's much more muted here) and has been showing up more recently at the perfume counter in things like Coach The Fragrance. The woods and patchouli in the base are very clean and sheer.

So, while it's not at all my type of perfume, I can recognize that Love Relentlessly is likely to sell very well as a spring fragrance for Tory Burch fans and other shoppers who want something sweet yet fresh. It seems well-made for what it is (and since Tory Burch's fragrances are handled by Lauder, that's not really a surprise), and although it's a little overpriced, it still costs less than a pair of those flimsy shoes. Go for it, Tory fans, if you're interested.