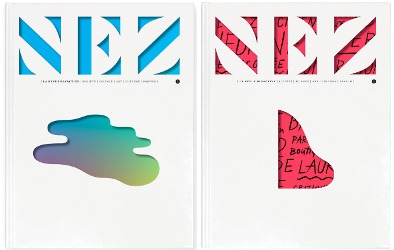 Scent is a part of life, from our first seconds of existence when we recognize our mother’s smell, to our last years, when a familial scent can suddenly transport us far away, into a past we’d believed forgotten.

Everyone is fascinated by scent, but smelling isn’t a sense as obscure and complicated as one would have us believe. On the contrary, it is within each of us, forms a direct connection to our emotions, and only asks to be invited to express itself, to blossom and be set free. And it’s our modest ambition to offer you this introduction to the world through your nostrils!1

So begins the first issue of “Nez: La Revue Olfactive” (spring/summer 2016). Jeanne Doré, of the French perfume blog Auparfum, along with the design and publications team of Editions Le Contrepoint, started Nez. So far, it has been released twice a year, for two issues to date, both in French. Nez's spring/summer 2017 issue, launching mid-April, will be the magazine's first English-language version. For me, it will be a must-read.

Why do I like Nez? Let’s start with the physical object itself. Although it’s officially a magazine, Nez feels as meaty as a book. It has a stiff cover with “NEZ” and a shape (on the first issue, shown above right, the shape is a nose) cut out to show the illustrated page beneath. The pages are thick and full of color. To me, Nez’s design is modern but approachable. It comes off as smart and interesting without trying too hard, and avoids straying into that irritating territory that says, “Hi, I’m cooler than you, and I’m trying so hard to prove it that I come off as kind of pathetic.” 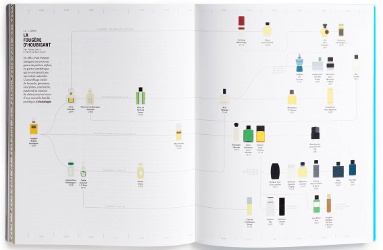 The Nez team invested in images, too. Nearly every page has original drawings and photographs, whether it’s stylized illustrations of perfume bottles for the “cahiers parfums” section of mini-reviews, or the comic drawings for “Le Propre et le Sale” dossier essay headings. Plus, each issue has a scent card. (The second issue’s card even includes “baby’s head.”)

Now, for Nez’s content. The magazine has five departments: “Odorama,” explorations of materials and aspects of perfumery; “Correspondances,” scent seen through other art forms and artists (for instance, the first issue includes an interview with Chef Alain Passard); “Magazine,” with general articles (I loved the one about perfume of the liberation following World War II); “Dossier,” essays surrounding scent; and “Cahier Parfums,” including fragrance reviews, brand portraits, highlights of classic fragrance (e.g. Coty Chypre), and even a humor section.

Nez isn’t a technical journal. It seems to aim for a readership of people who are intrigued by perfume and secondarily by smell in general, and who want to dip into the ideas, art and history surrounding scent. For instance, an article about vetiver delves into its production. An interview with perfumer Jean-Claude Ellena examines, among other things, the influence of Edmond Roudnitska on his work. An essay about describing scent proposes new ways to talk about perfume.

Plus, some of Nez’s content is just plain entertaining. I laughed at the Christmas shopping section, which presents mini dossiers on people ranging from “la tante artistique” to “le petit frère emo goth.” (Example: the artistic aunt’s name is Brigitte, she’s 62, and she’s in an open relationship. She’s a “former hippie, eccentric and exuberant, she lives with her three cats in a minuscule two-room apartment with books, vintage objects, and her paintings. She smokes two packs a day.” She used to wear Poison, Opium and Mitsouko. As a gift, Nez recommends By Kilian Good Girl Gone Bad, Molinard Habanita or Le Labo Ylang 49.)

I’m looking forward to this spring’s English edition, and not just because it includes a short brand portrait I wrote about Arquiste. I want a copy because I know it will be a good read.

1. From the Note from the Editor, page 5. Please forgive my lame translation of the original French.