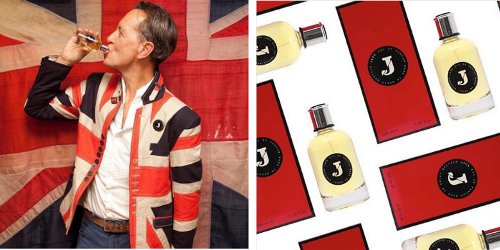 I don't review as many celebrity perfumes here as I used to, mostly because there aren't so many of them anymore. For years, articles appeared regularly in the beauty press talking about how celebrity perfumes were over, but it took a good long while for the reality to catch up to the warnings. Even now, they're not exactly over, but big name celebrities can no longer count on a deal with Coty, much less counter space at Macy's, and names that used to inspire a rush to the local mall — Britney Spears, Mariah Carey, etc. — now mostly debut in discount box stores like Kohls.1

At any rate, the backlash, if that's what it is, against celebrity perfumes doesn't much interest me. I've always said celebrity perfumes weren't much different, either in quality or in terms of how they are made, from designer perfumes. Some designers have input into the licensed products issued under their names, some don't, and it's about the same with celebrities — if you wanted to make an educated guess about whether or not you could be bothered to try an upcoming perfume, knowing the company who held the license (and the target market) might tell you as much as the brand name. The truth is, there are fewer celebrity perfumes these days not because fewer people are interested in celebrities (witness the mad frenzy over Angelina Jolie's deal to front the upcoming Mon Guerlain) but because right now, mid-priced mainstream fragrances are not where the money is.

What about celebrities who really care about fragrance? That doesn't always work out so well either: just look at Sarah Jessica Parker and her 10+ year wait to release the perfume she really wanted.2 Which brings us to Richard E Grant. That he cares about smells and scent is clear, but rather than licensing his name to a product, he has leveraged his connections to do exactly the sort of fragrance he wants, on his own terms, and notably, his brand isn't even called Richard E Grant, but Jack Perfumes, so named for the Union Jack. The story of how he came to launch the debut fragrance, Jack, which you can read in five parts on the Jack Perfumes website,3 is full of twists, turns, lawsuits, and plenty of advice from experts and otherwise, like "Avoid the Giants. The corporate Goliaths will gobble you up and spit you out" — advice he could have taken from Sarah Jessica Parker, presumably — and "Dare to be bold with your perfume. Go for the ‘Marmite’ factor".4 He perseveres, with help along the way from various figures in the perfume world (Lyn Harris and Roja Dove both make appearances). Eventually he meets up with perfumer Aliénor Massenet:

Sharp of feature, eye and mind, she wryly smiles when I de-pocket my favourite ingredients onto the table – lime, marijuana, jasmine, gardenia, mandarin, pepper and a perfume oil sample. It’s an undiluted pleasure listening to her professional interpretation of my amateur passions, concluding with the compliment that she would like to work together ‘as you have a very clear ‘idea’ of what the perfume should smell like’.5

When Jack finally launches, it's not at Macy's or Kohls (or Boots, rather) but at the upscale British department store Liberty London. That was back in 2014, and he's since launched two more fragrances. Now that the trio is at Luckyscent in the US, I'm finally trying them.

So, did he go for the Marmite factor? Well, close enough. Jack is hardly the most outré fragrance I've ever smelled, not even close, but it's not Eau de Gaga6 or Grace by Grace Coddington either. It's easy to wear, yet just quirky enough to inspire love-it-or-hate-it reactions. It starts with a hefty dose of lime-ish citrus, with likewise hefty peppery spices; it smells like a cocktail you can surely buy in some Brooklyn bar, and that I need to get the recipe for. Early on, it also veers slightly into man-aftershave smell, but it doesn't go too far in that direction, and that phase doesn't last long anyway. Eventually there is an herbal undertone that is just swampy enough to recall the promised marijuana, although I don't think anybody will smell it and right away think oh, pot! The base is woody and mostly dry, and like the opening, wears crisp and light, almost like a summer cologne — the frankincense, oud, tobacco absolute and vetiver are just warm and resinous enough to make it stand up to chilly weather, no more. If any of Grant's favorite flowers made it into the final formula, they are lost on me.

The lasting power is good but not fantastic.

Verdict: I like Richard E Grant, who doesn't? Jack's creation narrative is refreshing, as is the way Grant is always smiling broadly in promotional appearances for Jack, as though the whole thing is a riot. And I like Jack too. It's not outrageous (and it's almost certainly tamer than Stash SJP, which I still have not smelled), but it's got some spunk, and it was a pleasure to wear. Very much worth a try.

1. And Kohls, like Ulta, is not a perfumista paradise, for the simple reason that testers in some stores are awfully hard to come by, and samples are nearly as rare as unicorns.

2. Her debut perfume, Lovely, launched in 2005; read One Nosy Dame in The New York Times for an explanation of how Coty took Parker's original ideas and turned them into something more commercial. Follow that with Sarah Jessica Parker launches her second fragrance Stash SJP at the Los Angeles Times, which notes "The celebrity trend has been replaced by an influx of niche and indie brands, which are quickly creeping into many retailers’ bestselling scents. This could be an asset to Parker, who said she was unable to bring Stash to market more than a decade ago because she was told it wasn’t commercial enough."

3. Or, get a much abridged version in this video.

4. Quotes via Diary of a Perfume Ponce at Jack Perfumes.

6. And Eau de Gaga, back in 2014, is actually the last celebrity perfume I personally reviewed.