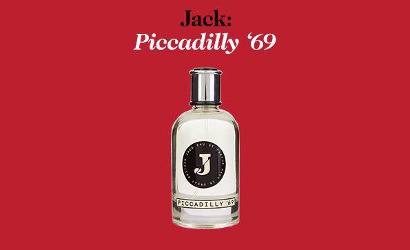 Late again — at least I am consistent — here is my review of the third and newest fragrance from actor Richard E. Grant, Jack Piccadilly '69 (for background, do see my reviews of Jack by Jack Perfumes and Jack Covent Garden). It was inspired by the actor's first visit to Piccadilly Circus in London, and encompasses a number of associated smell memories: the patchouli oil worn by the hippies, the petrol, the Earl Grey tea at Fortnum & Mason, the leather banquettes at his father's club (also in the notes: ginger, cypriol, green leaves, amber).

Perhaps that sounds, at least potentially, like a hot mess? It's really not. Most of the emphasis in Jack Piccadilly '69, to my nose, anyway, is on the bergamot tea; it wears like a middleweight unisex summer cologne, fizzy and bright and tart in the opening, and with just enough petrol and leather to provide interest, not so much that you'll immediately think of either. The ginger and cypriol provide a little hum of spicy / earthy warmth, and the base is a light woody amber.1 Any patchouli has been sanitized to meet modern standards of cleanliness: this is not your mother's patchouli (if your mother was a 1969 hippie).

Verdict: Easily my favorite of the three so far, and it really ought to come a in a travel size — it would make a perfect summer refresher and would easily make my buy list.

The very quick poll, just for fun: perfumer Aliénor Massenet, who made all three of the Jack fragrances, is going to make one for you. Pick a location and a year, and name your notes if you like.

Richard E Grant Jack Piccadilly '69 is $135 / £95 for 100 ml Eau de Parfum at Aedes, Luckyscent or Liberty London. There is also a matching candle.

1. Iso e super haters, beware. I will not be sending a sample of this one to Kevin.