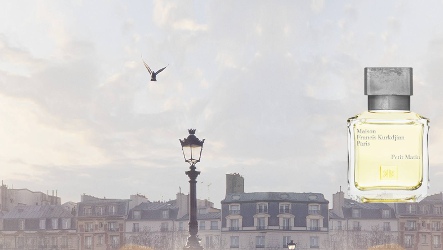 Pretending that you're an artist when what you've made smells like the fragrance right next to it... all that bullshit! The business is full of bullshit.

Hear, hear! That's perfumer Francis Kurkdjian, at the end of a long discussion with Persolaise about why perfumery is not art (among other subjects — if you have not read the interview, it is worth the time, and don't miss part 2). It's the sort of thing most perfumers don't say in public, and his candor is one of many reasons I have always found Mr. Kurkdjian — or at least, his public persona — extremely likable.

I don't always find his perfumes as appealing as his person, though. That is not to say I don't like his work, because I do think he's a brilliant perfumer. But in general I don't feel the same sort of natural affinity for his perfumes that I do for those of some other perfumers or brands. Many of the perfumes that the rest of you swoon over (Elie Saab Le Parfum comes to mind) I find extraordinarily well done without feeling any sort of tug at my heartstrings or wallet. Of Kurkdjian's entire output for other commercial brands, I own exactly one full bottle, and that is the first, and now discontinued, version of Acqua di Parma Iris Nobile, which he made with perfumer Françoise Caron.1

Pluriel Féminin, from his own brand, Maison Francis Kurkdjian, did have a little conversation with my heart and my wallet, and would have joined my collection if the line included single-bottle travel sizes.2 The newer Petit Matin falls into the same category. It's a woody floral citrus which functions essentially as a unisex citrus cologne. The brand already had several such things, including Aqua Universalis, Aqua Universalis Forte and Cologne Pour le Matin, and they are all perfectly nice (I think the Aqua Universalis has lots of fans) but in keeping with the explanation I've already given above, they did not move me.

Petit Matin starts cheerful and fresh and lively (the notes: lemon, litsea cubeba, orange blossom, hawthorn, lavandin and musk / ambroxan). It reminds me vaguely of the greenish lemon tea from Carthusia Mediterraneo, and has the same tonic effect in the heat, as should any decent citrus cologne. The Petit Matin is dewier and softer, though (the "luminous energy" in the PR copy is spot on) and the pale creamy florals in the heart, accented by the slightest tinge of almost-powder, give it the feel of a lazy sunny morning, when you might best linger on the patio over your tea and toast before making any big decisions. The dry down is, as advertised, a woody amber-y musk, rather transparent and again done in shades of pale — the image they're using, of the Paris sky in the early hours, is a perfect match for the scent — but with better lasting power and sillage than you might expect.

Verdict: Two thumbs up. Petit Matin would be a perfect addition to my collection of no-brainers, and like the best of them (Hermès Eau des Merveilles, for example) would spend more of its time on a shelf in the open, for easy access, than tucked away in the cabinet.

As it happens, the Candy Perfume Boy reviewed Petit Matin today as well, so I'll give him the closing line: "...it is yet another example of his effortless style of casual designer-style fragrances elevated by exceptional ingredients."

The quick poll: is there a perfumer (or brand) that you think is fantastic, but for the most part, you don't necessarily want the actual perfumes for yourself?

1. Although I should add that I wish I'd bought Jean Paul Gaultier Fleur du Male, and there are any number of his scents that I would not mind owning (and a few that I have in miniature). I just don't feel compelled to buy full bottles.

2. They do make travel sizes, but you have to buy them in refill packs of 3, and the bottle is not really a "finished" piece — it's meant to go in the "Globe Trotter" case. I don't want 3 refills, and I don't want the case, and in a perfect world the bottle would look less like a large sample. Still, I could buy the travel set and split it, and maybe someday I will, or, maybe some day they'll start selling mixed packs of 3? Or maybe I'll never own it.