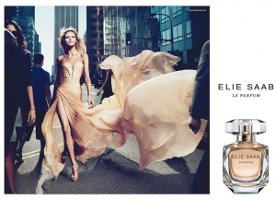 We’ve all heard the pap the perfume machine puts out. Here are some examples from recent releases:

The perfect fusion of sweetness and strength, passion and perseverance, this Oriental musk celebrates independent girls who aren’t afraid to follow their hearts and live each day as an adventure. (Baby Phat Luv Me)

Uh huh. You wear this and you’re sweet, strong, and adventurous, but not much of a speller.

Opulent, rich and oh-so special. A must-have. The new sensual fragrance for your ultimate evening. A glamorous scent that radiates from your true beauty. (Judith Lieber Night)

Come on, people. Someone paid for that copy? I'm already asleep.

So, when I watched the video about Elie Saab Le Parfum on the Elie Saab website and heard perfumer Francis Kurkdjian say, “I felt I had to translate a brilliant femininity,” and that he wanted to create a fragrance that reflects “when the sun is almost gold or even white,” and smells “as if gold was glowing so brightly it was almost white,” I was skeptical. Blah blah femininity blah light. Sure.

But, by gum, he nailed it. Le Parfum is a frenzy of white flowers that whirls itself into a searing vapor. It burns crystalline pure and bright as a piccolo.

I’m used to fragrances that start out tart or sneezy before settling into something with more dimension, underlain with a hum of base notes that outlasts the rest of the composition. Or, a fragrance might start out slightly lighter, but basically sing the same tune until it wears itself out hours later. Instead of the traditional pyramid or something more linear, Elie Saab Le Parfum is a firecracker.

Le Parfum kicks off with a traditional, slightly juicy, orange blossom. Fresh and virginal and done a hundred times. But hang on. Within a few minutes, jasmine and maybe lily kick in, just barely softened by rose. Then, someone lights a match, and aldehydes explode through the flowers. The explosion continues for a good half hour before calming into a silvery, kerosene-like, jasmine haze with a touch of sweetness.

You know the part of the Beatles’ “A Day in the Life” where the orchestra races from low notes to a crazed but thrilling crescendo at the top of each instrument’s reach? That’s what Le Parfum feels like to me, except instead of concluding in a low, sustained piano chord like the song does, the fragrance hangs onto its highest notes.

Besides orange blossom, jasmine, and a rose honey accord, Le Parfum’s official notes include patchouli and cedar. I don’t smell them distinctly. On me, Le Parfum simply fades away after five hours or so with a hint of clean musk, keeping the fragrance more chaste than carnal. It’s intensely feminine and will probably be a favorite for evening weddings. If you can, test Le Parfum from an atomizer. I don’t think you’d get the same effect from dabbing.

The narrator on the Elie Saab perfume clip describes Le Parfum as an “ode to light.” That sums it up nicely. It’s a strange little perfume. Strange, but pretty. I might need a small bottle for the thrill of the ride.