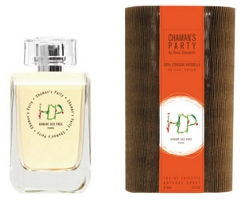 French niche line Honoré des Prés debuted last year with five certified organic perfumes, all (Chaman’s Party, Bonté’s Bloom, Nu Green, Sexy Angelic) save one (Honoré’s Trip) from perfumer Olivia Giacobetti. As I've said here before, I don't really care personally about the synthetic vs. natural debate — to the extent that it is a debate — but it's been nice to see more and more choice for consumers on the naturals front over the past few years, and of course anything from Olivia Giacobetti is going to get my attention.

My early favorite of the five: Chaman's Party, the woody-vetiver entry, of course. I have to note as an aside that the brand's Ecocert status doesn't stop them from issuing the same sort of breathless PR-speak as everybody else; Chaman's Party is described as an "explosive perfume due to its top-secret ingredients with aphrodisiac properties". I don't know about all that, but it's a wonderful vetiver, and like the recent Turtle Vetiver Exercise No. 1 from LesNez, I'd call it a must-try for vetiver enthusiasts.

The opening is beautifully spicy and rich and green (the notes: basil, clove, vetiver, gaiac, plus those aforementioned top-secret notes, which we would tell you about but then we'd have to kill you), and the dry down adds dry, dark, slightly-charred woods. Just enough basil and clove linger on to add an extra bit of zing to the already peppery-earthy vetiver. I wouldn't call it heavy, but it has a satisfying depth — it is not at all airy or transparent, as Giacobetti's perfumes so frequently are. It does tilt most definitely towards the masculine, but also layers nicely with the "field of wildflowers" entry in the line, Bontés Bloom.

Longevity, of course, is not generally what you go looking for in a natural perfume (and the rest of the Honoré des Prés line is mostly what you'd expect in that regard), but Chaman's Party lasts most of the day and through a shower.