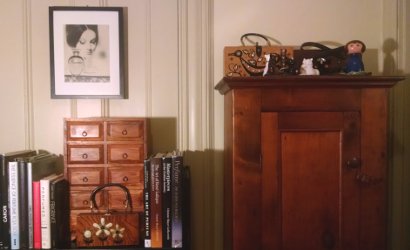 In talking to Jessica — yes, our Jessica — about her perfume life, I tried to squeeze out a juicy story. Maybe her love of roses had to do with an ex-lover who brought her a dozen lipstick pink rosebuds every Tuesday? Or, maybe it’s because she won the Miss American Beauty pageant at the horticulture society? But no. The best I got was that her first rose-centered perfume was Avon Roses, Roses, and it came in a pink bottle shaped like a pig with a screw-off head.

Jessica’s path to perfumistahood will probably sound familiar to a lot of us. She grew up in suburban New Jersey with a quiet mother who wore dramatic fragrances, such as Rochas Femme and Guerlain Shalimar, and a grandmother who wore Caron Bellodgia and gave her Avon perfume in figurative bottles, including the pink pig. 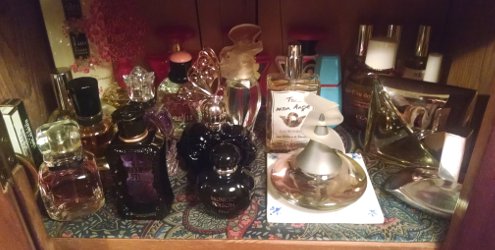 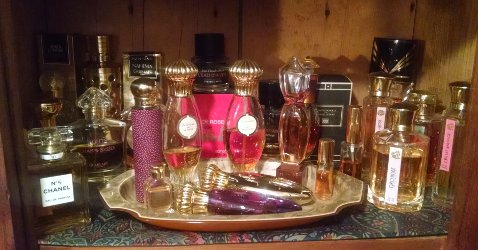 “It was by my early twenties that I really started to like rose perfumes,” she says. “Rosy and sweet.” Rose water, Crabtree & Evelyn Evelyn, Romeo Gigli Gigli, and the first Betsy Johnson joined her line up. Although she dallies with other floral notes, such as violet, she consistently returns to rose. She doesn't get along well with all floral notes, though. Although she likes smelling tuberose on others, it feels like a "costume" on her. The same goes for full-bodied, old school chypres. 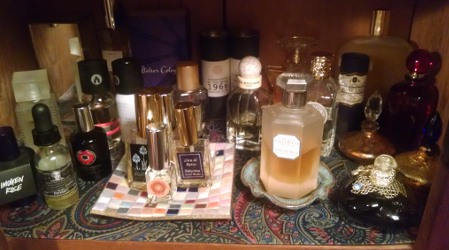 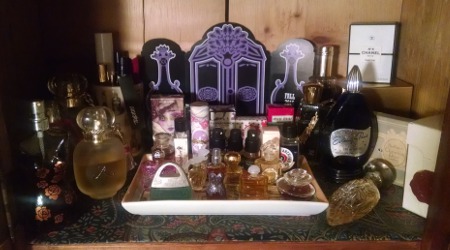 In 2002, Jessica heard that Givenchy was reissuing L’Interdit. Investigating it online, she discovered MakeupAlley and soon was swapping perfume and cosmetics and investigating niche brands. She had just moved to New York City and was slogging through her dissertation, and MUA’s perfume community was a welcome diversion. She says she’s continually surprised at how much that perfume people have in common besides perfume. Some of the people with whom she started as internet acquaintances are now friends in real life, nearly 15 years later.

“For a while, I was buying perfume at a fast and furious pace, then it slowed down,” she says. She estimates she now has between one and two hundred bottles, but would rather not count them. She stores them in an old farmhouse cabinet that had been in her mother’s family. For her birthday, her husband gave her a small cabinet with rows of drawers for her samples. She organizes her perfume loosely by house, with one section set aside for special fragrances, minis, and sentimental bottles, such as Rosine Poussière de Rose.

Each month, she pulls a handful of fragrances from her collection and puts them on a Bakelite tray on the cabinet’s top so she can focus on them. 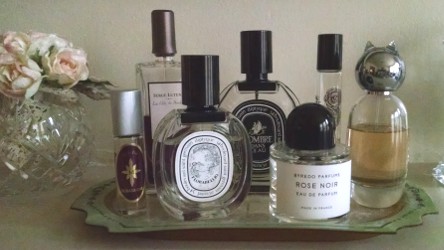 Jessica usually avoids vintage fragrance, because she doesn’t want to fall in love with something that will be impossible to find, but she wouldn’t say no to a bottle of pre-2007 Caron Bellodgia. She dreams of having some Guerlain Après l’Ondée parfum, and she regrets swapping away a bottle of Lolita Lempicka. Otherwise she sounds happy exploring the perfume world at a leisured pace, sniffing her way through fragrances redolant of summer gardens, patisseries, and dressing tables. She’s come a long way from that little pink pig.