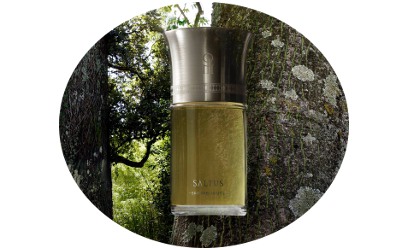 Who’s having trouble keeping up with new niche perfume lines? I definitely am. I’m even starting to get a little resentful about it. Enough already. It seems like every designer who fancies himself a tastemaker tosses together a branding campaign and a line of “edgy” perfumes.

I see two big problems with this. First, good design sense does not mean an experienced nose. Next, a lot of these lines are treading the same ground. They either latch onto an era or cultural mileu (the 1920s, writers, historic figures), or they shoot for the now banal take on naughty, artistic, and hip. We get a lot of sizzle for a gristly burger at a ludicrous price tag.

So, you’ll understand why I didn’t jump on sampling Liquides Imaginaires fragrances. Their bottles are gorgeous, but their branding (have a look at their website, but turn down the sound on your computer first) and fragrance names (in addition to Saltus, the Eaux Arborantes trilogy also includes Tellus and Succus) leave me cold.1

Still, Liquides Imaginaires Saltus has been getting attention lately, so I decided to give it a test run. Saltus’s notes include cedar leaves, eucalyptus, camphor, styrax, patchouli, incense, tonka, castoreum and sandalwood. In brief, Saltus is nice and would be a great introduction to an unusual, but not freakish, woody fragrance.

Let’s have a look at the company's blurb on Saltus:

The spirit of sap Scents emanating from inside the tree, just under its bark, from its resinous and camphorated vegetal nectar which ensures its growth. An intense perfume that sweeps us along by the momentum of its organic energy. Its spirit: the bubbling vigour of life, the will to live, to jump up, rise, the vital energy of the ambition to grow.

Lucky for us, Saltus is less purple than its description. But, as promised, it does smell of resin and camphor, especially at first. Its eucalyptus-y edge softens into a heart of cedar and sandalwood, rubbed with leather. The cedar’s sharpness, heightened by incense, is a great foil to the sandalwood, and castoreum gives the combination depth and an animalic touch without being funky. Saltus's patchouli plus tonka reminds me just a hint of cocoa. As Saltus wears, it sweetens and smooths.

Saltus’s blurb describes it as an intense scent, and, as you might have guessed from the list of notes, it is dense. But it has a moderate sillage. It lasts most of the day on skin and a couple of days on clothing, when the sandalwood really comes out.

Five years ago, I would have put down my cash for a decant of Saltus right away, but dense, “every base note but the kitchen sink” fragrances don’t appeal to me as much as they used to. They feel too monolithic. There’s no space in them. Also, for this type of perfume I might be tempted to reach for Comme des Garçons 2 Man or a fragrance from Commes des Garçon's Wood series.

That said, I’m sure lots of people will want Saltus on their dresser to reach for on cool mornings when their sap just won’t rise and they need some “bubbling vigor of life.” Plus, the bottle really is great.

1. To be fair, middle-aged women like me who read a lot of old detective novels and think a great afternoon includes a few hours at Goodwill followed by a martini probably aren’t their target market.