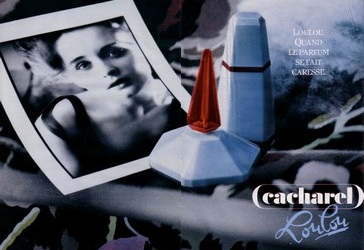 I must be feeling nostalgic lately. This week I found myself digging into my "perfume cabinet" and pulling out a bottle of Cacharel LouLou that I bought nearly a decade ago. Cacharel launched LouLou in 1987, positioning it as a more seductive older "sister" to the highly successful Anaïs Anaïs (1978). I was always intrigued by LouLou, and now I'm wondering why I've never worn it on a more regular basis.

Loulou is a floriental fragrance developed by perfumer Jean Guichard; its composition includes top notes of bergamot, black currant buds, green leaves, marigold and mandarin; heart notes of jasmine, heliotrope, mimosa, tiaré flower and ylang-ylang; and base notes of tonka bean, incense, iris, musk, vanilla and sandalwood. According to Michael Edwards's Perfume Legends, it was inspired by the silent-film actress Louise Brooks and her performances in films like Pandora's Box.1

Starlets continue to imitate Brooks's black bobbed hair, dark lipstick, and porcelain skin, but they never manage to duplicate her mischievous allure. Just like Brooks, LouLou has a mix of sweetness and sharpness that still intrigues me. It starts off with an astringent, almost bitter accord of citrus and green notes that might discourage me if it stuck around too long. However, like someone who comes off a bit abrasive when first introduced and then turns out to be quite charming once she lets down her defenses, LouLou goes from piercing to plush. Its heart offers a cherry-almond note of heliotrope, plenty of creamy white florals, and a liberal dusting of fancy talcum powder (partly from the iris root).

You can probably see why LouLou isn't really a crowd-pleaser, and if you really don't like powdery florientals, you won't get along with this one. On the other hand, if you're still undecided about notes like heliotrope and tonka and vanilla in your fragrance, you might find that LouLou tips the balance one way or another for you. Its generous dose of vanilla has a bittersweet edge — it never turns dessert-like. The dry down is still vanillic, balanced by a skin-musk and a breath of incense, and it brings LouLou to a very satisfying conclusion. LouLou has remarkable tenacity: I apply one spritz to the inside of each forearm, and at the end of a full workday I can still smell a gauzy layer of vanilla-musk and sandalwood clinging to my skin.

As Michael Edwards points out, LouLou was launched two years after the fruity-spicy Poison (1985); I've come to think of this scent as a midway point between Poison's weirdo diva and the heady, ultra-feminine (yet well-mannered) Trésor (1990). LouLou didn't succeed in the United States like either of those fragrances did, but it feels somehow less dated to me — maybe because it never saturated the market in the same way, or because vanilla has undergone such a renaissance over the past decade, or maybe because of some quirk in its design that just makes it hard to pin down.

I remember quite a few girls wafting clouds of Anaïs Anaïs when I was in high school and college, but not as many wearing LouLou. I didn't wear it in those days, although I admired its ads in many glossy magazines. I feel like LouLou and I were a "missed connection" for a long time. I'm glad we finally meshed, so that I can get a bit sentimental while still enjoying a sense of novelty.

One quick note about LouLou's opaque faceted bottle: it was designed by Annegret Beier, in shades of azure blue and blood red inspired by Matisse's Odalisque with Red Trousers (1921),2 and it perfectly suits the retro-chic style of the fragrance inside.

Cacharel fragrances can be somewhat difficult to find in the United States. However, LouLou is available at very reasonable price points through online discounters and auction sites.

If you're curious, you can also read reviews of LouLou on Bois de Jasmin and The Non-Blonde.