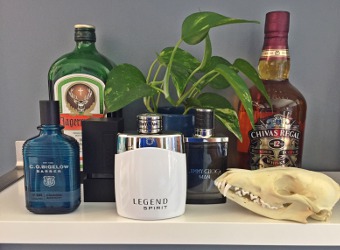 For this episode of Inside the Perfume Cabinet, I bring you a creature rarely spied at Now Smell This: a regular guy who doesn’t know Guerlain from Garry Shandling. Andrew Shayde has been wearing scent since he was fifteen years old — so, for twenty years now. He likes fragrance and can’t imagine not wearing it. But to Andrew, words like “flanker” and “niche” draw blank stares. In other words, he’s like most of the scent-wearing public.

First, a little background. Andrew is from Kentucky, and his father is a minister. (Some of you might have seen him and his father competing on The Amazing Race.) He’s a handsome, laidback guy with an easy smile, and I know at least three people who describe themselves as his best friend. He is first in line to any movie featuring superheroes, and can often be found with a Mountain Dew in hand. He has spent most of his career in HIV prevention and is now an events organizer for an AIDS service organization. He’s also the writer behind the Monsters Among Us comic book series.

Andrew’s earliest perfume memories involve his three pet mice, Shadow, Chance and Sassy, named after the animals in The Incredible Journey. His sister objected to the aroma in their cage and sprinkled it with Barbie perfume. The mice didn’t survive.

Andrew was first inspired to wear scent when he was “starting to flirt. At that age you want to show you’re a man.” He proved his manhood with a bottle of body spray called Bod Really Ripped Abs. (We both guffawed at this.) “The bottle was shaped like a torso. It actually had a six-pack,” he said. He described the scent as “powerful, clean, like a cheap version of Cool Water.”

At about seventeen, he decided he wanted a serious bottle of cologne, so he went to the Macy’s in Lexington, Kentucky. After garnering condescending stares for mispronouncing Joop and Acqua di Gio, he brought home a bottle of Liz Claiborne Mambo. He liked it because it smelled “unique.” No one else he knew wore it.

This became one of his criteria for choosing a cologne. “Men are like gorillas,” he said. Scent is a weapon of seduction, and they don’t want anyone else smelling like them. For that reason, he keeps an eye on new fragrance releases, and if he likes something, he’ll buy a bottle right away. That way, people know that the fragrance is his, and they won’t poach it. 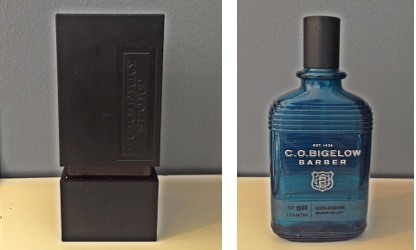 These days, Andrew relies on four bottles of fragrance, which he keeps in a drawer. For the gym, he wears “one spray of Blue by C.O. Bigelow (shown above right) sprayed a foot above my head.” That way, it’s light enough to counteract gym smell. He calls it “clean, simple.”

For everyday — work and dates, for instance — he wears Montblanc Legend Spirit. (He used to wear the original Montblanc, but people kept confusing it with Abercrombie & Fitch Fierce, so he dropped it.) He likes Legend Spirit because it “smells good, clean, not obnoxious.” He says that sometimes he likes to change up his everyday fragrance to keep a guy’s interest, so he’ll occasionally put Hollister Jake or Burberry Sport (above left) into rotation on dates. (Andrew’s pro tip: washing your hair with a dab of scented shower gel is a nice way to bring scent to bed without being overwhelming.)

For suits and high-end occasions, he likes Jimmy Choo Man (shown below). “People ask me what I wear, and I can say ‘Jimmy Choo.’ I feel fancy.” (He swears that people don’t look at his feet when he tells them the name of his fragrance.) 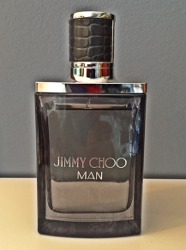 He likes his apartment to smell good, too. He used to use scented candles, but the smoke from their wicks was dirty. So he switched to Scentsy wax warmers. He has three of them, each burning something from the Scentsy Man series.

Andrew isn’t keen on fragrances that are too flowery or have cucumber or melon notes. For instance, he’s not a fan of Paco Rabanne Invictus or L'Eau d'Issey Pour Homme, and he doesn’t like a super spicy scent. He likes “dark, moody” fragrances, but doesn’t think they suit him, and he doesn't want to smell like "a cigar box." If he were king of the perfume world, he would require the “sport” versions of fragrances to be actually fresh and light enough to be suitable for sports.