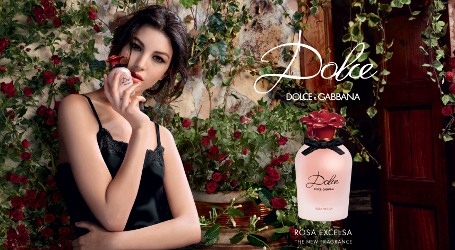 This happens again and again, and I never learn. Some upscale fashion brand releases a new rose fragrance, and I get my hopes up, despite the accumulated experience of the past decade, and then I try it and I'm disappointed. I like Dolce Rosa Excelsa's concept and name and packaging, and I love the promotional "movie" starring the divine Sophia Loren. The fragrance, unfortunately, doesn't live up to its visuals: it's an overpriced pink fruity-floral.

Dolce Rosa Excelsa begins with citrusy-sweet fruit, including something that reminds me of papaya (not "papaya flowers") before moving on to its floral theme. I'm smelling lily of the valley, even though it's not listed as one of the notes, plus a very sheer rose that feels pink, if you know what I mean, rather than red (despite the bottle-cap and the video). It's all very spring-y and girlish, but it's also shrill, and there's an Elmer's Glue-like note throughout that makes me wrinkle my nose. The base is a transparent yet very persistent synthetic musk. Basically, Dolce Rosa Excelsa is to rose as the original Dolce was to white florals: thin and generic and long-lasting.

Come to think of it, Rosa Excelsa is not only similar to other "prestige" rose flankers, but it's uncannily similar to Dolce & Gabbana's own Rose The One from 2009. I laughed when I re-read my own review of Rose The One, which described it as having "a very familiar-seeming accord of lily of the valley, peony, and unripe mulberries" and being "unapologetically synthetic and somehow high-pitched, sweet with a sour edge, and although it lasts a while on skin, it never deepens into anything more reflective or seductive." If D&G can rework their fragrances, I suppose I can recycle parts of my own reviews.

As always, I'm in favor of a new rose fragrance. But if you're looking for a very pretty, fresh rose scent and you want to set your sights higher, there are better alternatives: Annick Goutal Rose Splendide, Divine Spirituelle, YOSH Sottile, Byredo Rose of No Man's Land — I could go on. Feel free to share your own favorites in the comments.