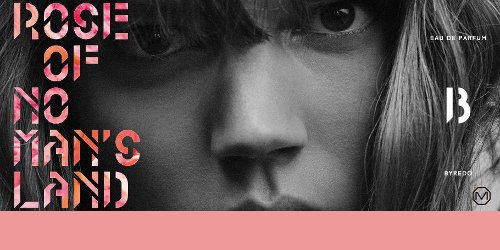 I've seen some beautiful flowers
Grow in life's garden fair,
I've spent some wonderful hours,
Lost in their fragrance rare;
But I have found another,
Wondrous beyond compare... 1

Rose of No Man's Land is the newest fragrance from niche line Byredo. It's a tribute to the nurses who cared for wounded soldiers on the front lines of World War I, saving lives in the danger zone of the "no man's land" — the space between opposing armies. A World War I-era song praising these nurses gives Byredo's fragrance its title and inspiration: "Mid the War's great curse,/Stands the Red Cross Nurse/She's the rose of 'No Man's Land!"2

Rose of No Man's Land is basically a contemporary rose soliflore, and I think it's a lovely one. Its composition includes top notes of pink pepper and Turkish rose petals, heart notes of raspberry blossom and Turkish rose absolute and base notes of papyrus and white amber. Some of those notes were apparent when I tested Rose of No Man's Land, others less so. The roses smell very pink, if you know what I mean: they're fresh and springtime-y rather than dramatic. The pepper is also very much in evidence and is married very smoothly with the pink rose petals.

As Rose of No Man's Land warms and evolves on my skin, I also notice a tangy red-fruit note that reminds me of rhubarb and a grass-greenish note that could be the papyrus, although I have no idea what papyrus actually smells like. This fragrance has above-average longevity and sillage; I've even received a few compliments when I wear it, which rarely happens. (I think most scents tend to quiet down and stay close on me.) The far dry down is a soft, creamy rose note.

I'd place Rose of No Man's Land on an imaginary shelf with other elegant niche rose soliflores like Maison Francis Kurkdjian A la Rose and Parfums DelRae Coup de Foudre. I admired those fragrances, but didn't fall head-over-heels for them; Rose of No Man's Land, however, has a little something "extra" that makes me want to keep wearing it. Byredo's Rose Noir has been one of my most-worn fragrances of 2015, but I can imagine myself purchasing a small bottle of Rose of No Man's Land when spring rolls around again. 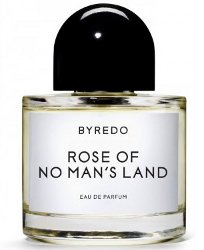 A portion of Rose of No Man's Land's global profits will be donated to the Swedish division of Doctors without Borders/Médecins Sans Frontières, as an appreciation for today's medical caregivers in war-torn regions.

Bonus reading: a short article about World War I nurses at The Express.

Byredo Rose of No Man's Land is available as 50 ml ($145) and 100 ml ($220) Eau de Parfum. For purchasing information, see the listing for Byredo under Perfume Houses.

1. From the song Rose of No Man's Land by Jack Caddigan and James Alexander Brennan, 1918.