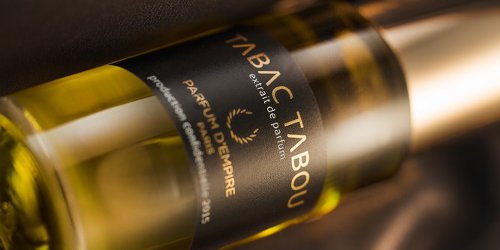 Tabac Tabou is the latest from French niche line Parfum d’Empire. It's sort of limited edition — the brand says it will be produced yearly in limited quantities, with the year of production listed on the label.

Tabac Tabou was high on my "can't wait to sample" list, not least because I so loved the fairly recent Azemour Les Orangers and Corsica Furiosa (the fragrance released between those two, Musc Tonkin, I admittedly didn't much care about either way). Plus: tobacco, narcissus, fresh hay, honey? That sounds most excellent, in fact, it sounded so excellent to me that I'll repeat the description, originally from Luckyscent:

In Tabac Tabou, the tobacco leaf arrives folded in whiffs of fresh hay and wild landscape, rich and utterly untamed. A green, fresh narcissus meets white flowers, rough-hewn leather and compellingly fur-like animalic notes. Sweet, honeyed immortelle supports the main ingredient's natural sweetness, while unannounced secret ingredients lend incredible depths of earthy yet delicate nuance, confirming our feeling that this isn't so much a standard fragrance as it is a direct pipeline to a mystical world that used to be.

In the event, the first spray of Tabac Tabou was a bit of a surprise, and I won't repeat all the many discussions we've had here about fragrance names, but suffice to say that yes, tobacco leaf does arrive folded in whiffs of fresh hay and wild landscape, and so on and so forth, but tobacco is not the star of this show by any means, and if I were naming it, hay or narcissus, or maybe both, would be in the name, along with some romantic-sounding French euphemism for the "fur-like animalic notes".

Tabac Tabou opens on a deep, dense, almost horse-y funk — if you are sick and tired of smelling anemic / laundry detergent fragrances, here is your antidote. Some of the funk remains as the backdrop while the hay and narcissus come into focus, still dense and rather dry, and it is in these early stages that the tobacco, while subtle, is most obvious. The smell is a perfect match for the golden browns of the image shown above, and even more so during the later dry down, as the honey and immortelle sweeten the pot as it were, and the "rough-hewn" leather starts to get, well, rough-hewn. The leather was more obvious to me on some wearings than others, but at least once, I wondered why Cuir was not in the name too. It is also true that a couple of times the narcissus took on an almost soapy quality early on, but by and large, every time I wore it, the thoughts that came to mind while wearing it were "golden brown" and "hay".

I found the lasting power to be extremely good.

Verdict: I suspect many people will love Tabac Tabou. If a narcissus with a bit of funk sounds appealing to you, and especially if you adore hay notes, do try it. I am not sure I could say why I did not even come close to falling in love — I do like hay, and I do like narcissus, and I appreciate a bit of funk, but there was something about this much of all three, over such a long period of time, that wore on me. I wanted a bit more sparkle and liveliness, or something. Anyway, if you've tried it, do comment. Either way, you can find a more detailed review at Kafkaesque, although she did not love it either.