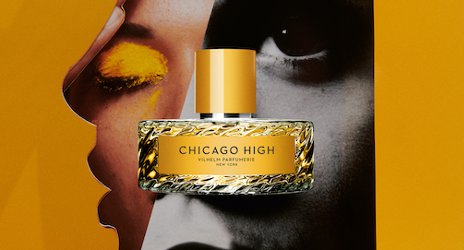 This news item hasn't received the attention it might have attracted at a less fraught moment in history: F. Scott Fitzgerald's iconic novel The Great Gatsby has entered the public domain in 2021. (Just in time for us to realize that our own Twenties might not be quite as Roaring as we hoped — at least, not yet, thanks to Covid-19.) Over the past ninety-five years, The Great Gatsby has given rise to dozens of adaptations in all media. (Do you have a favorite film version of this novel? I don't.) Even a few perfumes have attempted to capture the spirit of this classic book, with Vilhelm Parfumerie's Chicago High joining the group in 2020.

I wondered about Chicago High's inspiration when I read this description:

Structured like classic early 20th century perfumes, Chicago High takes you for a sparkling cocktail of champagne and pineapple infused with honey and tobacco that leaves a leather, patchouli amber whisper behind, like the sultry, smoky memory of a most excellent night at Jay Gatsby's mansion or an exhilarating ride up a Chicago skyscraper — the peak of the 1920s, bottled.

Gatsby's parties may have become fictional symbols of the 1920s — despite the story taking place in 1922 rather than at the "peak" of the decade — but his mansion is located securely on the North Shore of New York's Long Island. Why Chicago, then? There's no Fitzgerald connection, other than his earlier visits to girlfriend Ginevra King's elegant home in Lake Shore, about thirty miles outside the city proper. Fitzgerald aside, Chicago itself is definitely a city known for its Art Deco skyscrapers, but most of them were erected later in the 1920s or in the 1930s.

No matter, you say; don't be so pedantic. What about Vilhelm's Chicago High? Fine. Chicago High begins with a quick burst of pineapple — I had wondered whether this note was a nod to Patou's Colony (originally released in 1938), but it's gone before I can really ponder it. For most of its (considerable) duration on my skin, Chicago High is a slowly spinning olfactory carousel of whiskey, honey, and sweet pipe tobacco, one note dominating after another, then swinging around again.

If you're still insisting on the Fitzgerald tie-in, Chicago High would fit the moment you stepped away from Gatsby's party, honey-and-whiskey cocktail in hand, to enjoy a quiet smoke in your host's "high Gothic library, paneled with carved English oak." Its far dry down is a warm, resin-y amber. I'll be saving the rest of my Chicago High sample to wear when there's a change in the weather and "an autumn flavor in the air" (to quote the novel again). 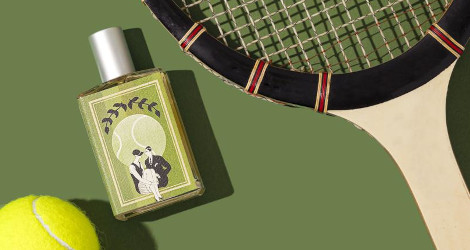 Meanwhile, if you're looking for something a little more summer-appropriate but also Jazz Age-themed, you may also wish to try Imaginary Authors' The Soft Lawn. This fragrance's fictional subject seems loosely inspired by F. Scott Fitzgerald and This Side of Paradise (1920): "Claude LeCoq published his first book, The Soft Lawn, in 1916 while still attending Princeton University..." Robin reviewed the original version a while back and I've just tried "Edition 2.0" of this fragrance, which includes notes of linden blossom, grapefruit, laurel and ivy leaves, vetiver, oakmoss and fresh tennis balls.

I don't remember the original scent too well, but this Soft Lawn strikes me as denser and heavier on the linden note than its grassy predecessor; it's also mossier and more conventionally masculine than I anticipated. I can imagine it wafting off a young man who has just visited the barber and is now headed out to the tennis court or golf course, dressed in white and freshly anointed in aftershave lotion. Maybe a figure in a J. C. Leyendecker illustration, say, if not Gatsby himself.

Note: for further reading on Fitzgerald and The Great Gatsby, academic and author Sarah Churchwell selected five titles for this article. I can also recommend Careless People, her own study of Gatsby. (Sarah and I were briefly acquainted, long ago and on that very same Princeton campus attended by Fitzgerald and "Claude LeCoq," although I doubt she'd remember me. That's another story.)