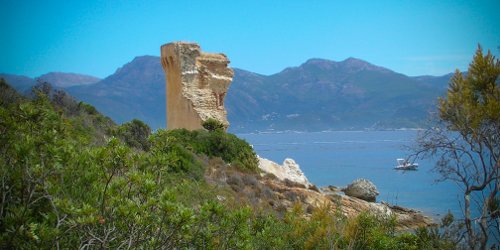 Corsica Furiosa is the latest from French niche line Parfum d’Empire, and it centers around mastic, native to the island of Corsica, where perfumer Marc-Antoine Corticchiato spent part of his childhood (he was born in Morocco and spent part of his childhood there as well). It is perfectly named; the PR materials refer to a "a verdant blast" and that's exactly what Corsica Furiosa is all about.

The "verdant blast" starts off with plenty of lime-y citrus. It's resolutely, unapologetically green and smells strongly of the outdoors, untamed, in high summer: there are grassy notes and an overdose of tomato leaf, some almost-sneezy black pepper, flashes of peppermint and other green herbs, crushed pine needles and plant sap (the listed notes include mastic, eau de vie, wild mint, tomato leaf, pepper, honey, hay, cistus and oakmoss). And yes, pretty much all at once. It's not entirely linear but it's relatively linear; the dry down does get softer, and the sharpness of the opening turns to a softer, rounder sort of (brownish, late-summer) green, with hay and tobacco leaf tempering the astringent tomato leaf and a bit of sweetness over the mostly dry, spicy-mossy-woody base.

I love Corsica Furiosa. I don't love it as much as Azemour Les Orangers, my personal favorite of the Parfum d'Empire line so far, but I would very much like to have a bottle (in a size smaller than they sell, mind you — see below). Still, it's easy enough to imagine that it was intended as an exercise in capturing a scent memory as much as an attempt to develop a wearable perfume; in other words, it seems unlikely to be universally adored, even by lovers of green scents — this is not your typical galbanum-based leafy green.1 I sympathize entirely with those who find it less than perfect as a personal fragrance. To wit...

The most positive, tactful interpretation I can come up with would be a tomato leaf garden drenched by a tidal wave of gin-and-tonic, and located at the base of an icy Alpine mountain in Switzerland.

[...] It’s endlessly green, rather exhaustingly dull, and completely monolithic in its focus.— review at Kafkaesque

So, as always, try before you buy. I would love to hear comments on Parfum d'Empire's new packaging (shown above). Does anyone love it? I don't, and I hate that there are no longer 50 ml bottles. Boo, hiss. 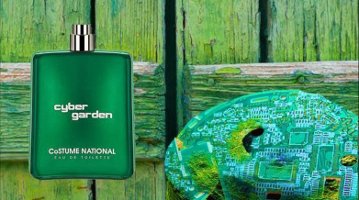 If you'd like a green that's a little less uncompromising, and maybe easier to take to the office, Costume National's Cyber Garden might fit your purposes. Like Corsica Furiosa, it is aptly named, and smells reasonably like its inspiration as a "...futuristic vision, an imaginary scene of what a garden would look like far beyond our present time." It was developed by perfumer Antoine Lie around three accords (Green Ether, Vynil Accord and Hybrid Moss). This is a fresh, clean, bright sort of green with a sharp citrus opening and a (presumably) purposefully synthetic aura: you might pick out some of the notes, but it doesn't smell like any natural material in particular, and it definitely doesn't smell like the outdoors. It's been hanging around in my purgatory basket ever since I got a sample last year: the metallic edge is sort of interesting, but it's got a tendency to smell oddly sour on my skin, and the synthetic freshness gives it an unfortunate kinship with the many fresh greenish men's colognes on department store fragrance counters. Nicely done, though, and worth a try.

Do comment if you've tried it, or if you have any favorite green fragrances you'd like to recommend!

Note: top image is Corsica [cropped] by liquene at flickr; some rights reserved.

1. In that sense, it reminded me of Diptyque Virgilio, if anyone remembers that one. Corsica Furiosa is also distantly related to Diptyque's L'Eau Trois, but only distantly.