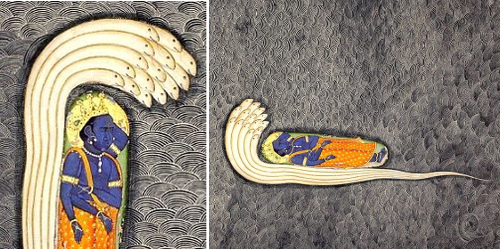 The name Naja has associations with the cobra and its semi-divine representations known as Nāgas. The Nāgas are linked to water; from India to Thailand these mythic creatures live near rivers, ponds, lakes, and often "haunt" wells. Old Hindu tradition said the part-human, part-snake beings would only bite evil people or those who would not live to be old. Art showcasing the Nāgas (and their female counterparts Nāgis or Nāginis) is wonderful. For this post I've shown the Nāga Shesha (also known as Anata), who is the Nāgarāja (king of the Nāgas); he's not only supporting Vishnu...but the entire universe.

Oh, and Naja was also a brand of French cigarettes in the 1930s. 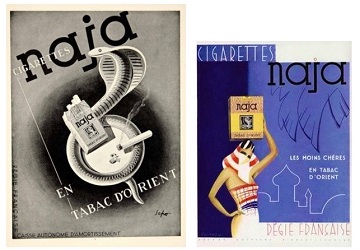 Now Smell This has Vero Profumo covered; all Vero scents (except Kiki) have been reviewed. As far as I remember, Naja is the first Vero scent I've smelled.

When I had my partner wear Naja he said it was like "smelling a jungle flower." This flower has a "hiss" at first sniff — a nose-pinching mix of 'honey': dripping from ripe fruit flesh, oozing from linden blossoms and seeping through dried tobacco leaves. Within minutes, Naja softens and becomes almost talc-y...and even sweeter, with dense osmanthus mixing with the scents of honeycomb and blond tobacco leaves. Naja has a vintage vibe (think pre-reformulated Caron perfumes) and wears heavily for a few hours before it disappears around hour number 5. The materials used in Naja smell superb.

Since tobacco dominates Naja, I believe Naja cigarettes (and not cobras or deities) had the most influence on the perfume's development. Though melon is a listed note, I don't detect it (but there's a juicy fruitiness in Naja's opening); Naja does not conjure the underground/water-world of the Nāgas, either.

I enjoy Naja but don't need to buy a bottle. I've got tobacco covered in my collection, and I've smelled the best honey perfume ever: Serge Lutens Miel de Bois. Nothing compares to Miel de Bois! (I'm afraid to sniff the current formulation; if you have, give me the scoop, whether it be heartening or heart-breaking news). 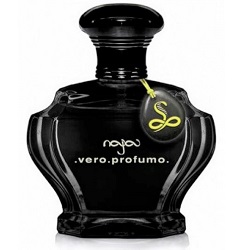