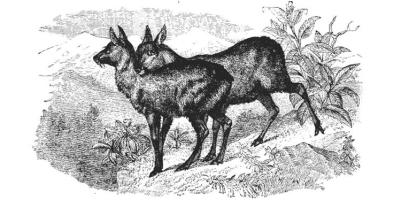 Parfum d’Empire is one of my favorite perfume houses, but on occasion, its references to warmongering dictators,1 brutal tiger hunts, and, now, a celebrated raw material from an endangered species, annoy me. I’ve written about musk and the musk deer before so I won’t repeat myself, but creating a perfume called Musc Tonkin, and taking that a step further and making the perfume a limited edition (which gives it the air of a “rare” commodity) strikes me as insensitive, especially right now as many wild animals around the world are in danger of being wiped out for their body parts: the elephants of Africa come to mind (please Marc-Antoine Corticchiato, don’t develop an “Ivory Tusk” perfume inspired by the Kingdom of Benin).

Rant over, I will say I’m always interested in smelling a Parfum d’Empire creation. Musc Tonkin2 goes on strong, with a fragrance reminiscent of leather scented with aromas that remind me of carnation-cloves/cinnamon and “hairy” musks (or should I say well-aged manure?) I grew up in a family of gardeners and I associate gardening with the scent of — chicken manure. Every February or March, my father and grandmother arranged to have a large quantity of fresh chicken manure delivered to the edge of a woods they owned. This manure was allowed to age before it was used in our garden. After a year spent in the sun, the rain, the heat and cold, the manure was ready to use around plants or to enrich the soil of flower and vegetable beds. The cured manure smelled sweet, not at all unpleasant; as I sit here remembering that scent I recall it having a floral character.

As Musc Tonkin develops on skin it has a mild “fertilizer” vibe: indoles mixed with earth. During the dry-down, Musc Tonkin’s syrupy opening becomes lighter and hazy…as if the aroma is no longer anchored on my skin by its heft, but has evaporated and is hovering like a haze or fog around me. In this phase of development, there is a background, edible component present: the scent of a meaty gravy perhaps — flavored with dollops of spicy amber and patchouli. (Ylang-ylang and a vanillic element are also discernible.)

As I wore Musc Tonkin during the course of two days I kept thinking, as often happens, “This reminds me of SOMEthing I’ve known or experienced....” Finally, I realized the problem with my memory was that Musc Tonkin reminds me of several fragrances: Yves Saint Laurent Opium’s “vintage” spicy ylang-ylang; Serge Lutens Muscs Koublaï Khan’s leather, castoreum, and oily-scalp musk; and Hermès Equipage’s clove, patchouli and faux/dirty tobacco.

If you are at all turned off by indolic or musky perfumes, you’ll probably dislike Musc Tonkin (on my skin, the fecal element lasts into the dry-down…it becomes very faint, but it never disappears). If you adore musk fragrances, you’ll certainly want to try Musc Tonkin.

Musc Tonkin is a well-crafted fragrance, but it doesn’t strike any new chords (or accords); it has a retro (and to my nose, feminine) vibe (think: 1970s); it’s well-blended and smooth (even giving a hint of powder in the extreme dry-down). Musc Tonkin’s lasting power is good and its sillage respectable (not too diffusive).

If Musc Tonkin is a great success commercially (supposedly only 1,000 bottles were made), one supposes it may join the permanent Parfum d’Empire line-up. If that doesn’t happen, this is one “extinction” I won’t lose sleep over.

Parfum d’Empire Musc Tonkin is available in 50 ml Extrait de Parfum, €120. It appears to already be sold out in some locations, but is still available on the Parfum d'Empire website; otherwise, for buying information, see the listing for Parfum d'Empire under Perfume Houses.

2. I’ve never smelled the raw material called Tonkin musk, so I have no idea if Musc Tonkin is a realistic re-creation.