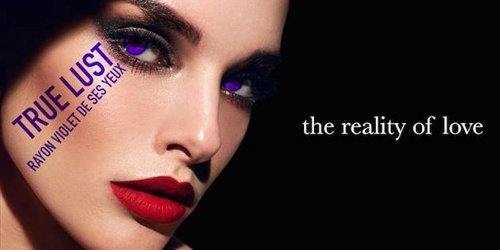 One of the hazards of reviewing fragrances for so long is that I can’t always remember what I’ve sampled. When I read that Etat Libre d’Orange True Lust combined Putain des Palaces and Dangerous Complicity, I drew a blank on what that might smell like. I even had to go back to confirm that I’d reviewed Putain des Palaces at all.

On rereading the reviews, it started to come back. Both fragrances are feminine, silk-stocking-ed sort of perfumes. Putain has a feral kick while Complicity might be the prettier of the two, although it lost my interest as it dried down. Now that I’ve smelled True Lust, I’m not sure why Etat Libre bothered to combine them. All three fragrances are lovely, and none is ferociously different from the other, at least not in mood.

As was true for Dangerous Complicity, True Love’s delicious first half hour of gingery citrus and tingly florals is my favorite part of the ride. True Lust adds Putain des Palaces’s hint of body odor to the mix, but it isn’t as bawdy as, say, Rochas Femme. As time wears on, True Lust’s brighter notes fade into rice powder, but its animalic notes persist with a hint of what smells like passion fruit.

At this point, Dangerous Complicity would have been settling into a warm and boring amber, wood and cashmeran, but True Lust simply sucks in its sillage and quietly fades away, still hanging onto its powder and hint of fruit and body odor. Eventually the animalic notes give up, and a neutral powdery wood takes over. True Lust smelled best on me when I braved past dabs and slathered the whole sample vial on my arm, but even that amount dialed down to pianissimo after an hour or so of wear. 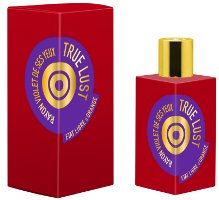 My verdict? If you love Putain des Palaces, you’ll probably like True Lust, but I’m not sure you’d have a reason to switch. If you like Dangerous Complicity but can’t handle animalic notes, don’t even try True Lust. If you haven’t tried any of the three, and you like aldehydic florals with animalic notes and fruit, see if you can’t get your hands on a decant of Amouage Jubilation 25.

Etat Libre d'Orange True Lust is available in 100 ml Eau de Parfum for $145. For information on where to buy it, see Etat Libre d’Orange under Perfume Houses.