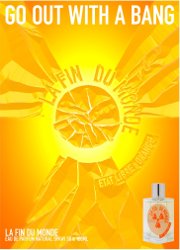 Go Out With A Bang. Or not. Before smelling Etat Libre d’Orange’s new La Fin du Monde* fragrance, I imagined many ways to approach the ‘end of the world’ in perfume — the possibilities! —what FUN! Having worn La Fin du Monde for two days (not scary, not inspiring, and definitely not fun), I’ll save any talk of earth’s annihilation for a future review of a worthy scent.

When first applied to skin, La Fin du Monde presents a sweet, earthy/food-y spice mix of carrot seeds and light cumin, with some pepper in the periphery. Although this spice accord sounds dense (and it even has a hint of "caramel") it’s sheer and clear. La Fin du Monde sweetens considerably in mid-development with benzoin. Vetiver and sandalwood (or some "wood")  combine to produce a drop or two of (fleeting) ‘sweat’ — almost onion-y. The base of La Fin du Monde smells of benzoin (turned ashy) with some ambrette seed muskiness.

La Fin du Monde, like a few other Etat Libre d'Orange scents, has a jarring character (especially during the first phase of development); accords and notes clash, fail to merge or converge onto a "path" or plan (that's fine, and such a technique can produce some interesting perfume experiences). But in La Fin du Monde the result seems haphazard, unskilled. And the “popcorn” everyone is talking about? I don’t smell popcorn…or cannon powder (too bad). There is a moment or two of a harsh "electrical" scent...maybe that's the popcorn being scorched in a microwave oven? 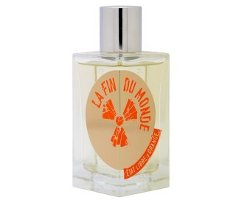