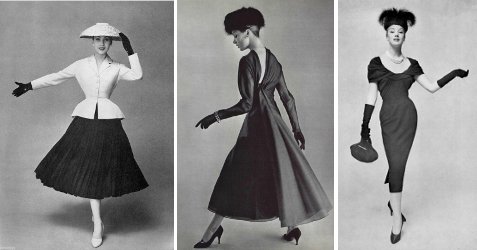 Poor Etat Libre d’Orange Dangerous Complicity has had a bit of a bum rap. It was launched at the same time as the fabulous The Afternoon of a Faun, which probably stole a bit of its thunder. Plus, Dangerous Complicity’s PR pap didn’t do it much of a favor by leaning heavily on unisex sensuality, inscrutable references to the Garden of Eden, a billing as a skin scent. As a result, the fragrance seems to have sunk into a hole.

To me, Dangerous Complicity is none of that. Instead, it’s an ultra-girly, elegant fragrance that broadcasts champagne, silk charmeuse and wrist corsages. But, when it wears down, it throws off all its retro associations for a comforting — or boring, depending on where you’re coming from — dry down of amber, cashmeran and wood.

This afternoon I had the happy concurrence of wearing Dangerous Complicity while reading The Golden Age of Couture: Paris and London 1947–57, a catalog published to accompany a 2007 fashion exhibition at London’s Victoria & Albert Museum. Flipping through its pages, my sample tube of Dangerous Complicity’s heady mix of osmanthus and jasmine perfectly complemented the catalog’s dreamy photographs of dresses comprised of yards of frothy fabric, shaped to exaggerate the feminine figure. The models look remote and point their Roman noses in the air. The dresses, though, blend curvaceous luxury with pure pulchritude. (The Dior Bar suit, shown above left, supposedly packed eight pounds in its skirt alone!)

Those days, women didn’t have immense wardrobes. Dresses were carefully chosen to last at least a few years. A 1947 Home Economics textbook, Clothes for You,1 carefully documents the average “Junior Miss, Western Style” wardrobe. It was sparse and meant to wear like iron. The “best dress” entry says, “Cost, $3.95. Jumper of bright red luana cloth. Blue braid trim. Can be dressed up with best blouse or down with striped blouse. All season, all occasion.” I imagine it accompanied by a dabbing of Coty Muguet des Bois. But think of a post-war Colorado housewife contemplating the I. Magnin copy of a Dior gown. Wow! A perfume radiant and complex would need to accompany it. Dangerous Complicity might stand in — at least for an hour or so.

Dangerous Complicity starts with a shimmer of jasmine and osmanthus that weakens the knees. For those not familiar with osmanthus, it mimics jasmine’s high-pitched buzz, but adds a smear of apricot jam and suede, taking it down the octave a few notes. In Dangerous Complicity, underlying this dreamy tingle are amber and sandalwood, but not much more that stands out. It's uniform, seductive fragrance meant to be dabbed between breasts.

But as Dangerous Complicity ages, it flattens to a ho-hum blend of the “cashmere woods” and amber that puff from a dozen supermarket air fresheners. Too bad. Where at first I was ready to buy a bottle, now I suspect a Bath & Body Works lotion might fill in. Unless, that is, I were willing to spray Dangerous Complicity over and over to smell its magical beginning. (If it were in my budget, I just might.)

Dangerous Complicity  reminds me that a truly beautiful fragrance balances beauty and complexity and a grain of ugliness that keep the nose engaged. Instead, Dangerous Complicity is like a pretty wallpaper that captures your attention initially for its melodious composition, but ends up becoming just that — wallpaper. It could have picked up a lesson from Christian Dior in the days of the V&A catalog I perused early today, the days when it launched Miss Dior. Dazzle, but never pander. You might not astonish the crowds, but those who love you will love you for generations. 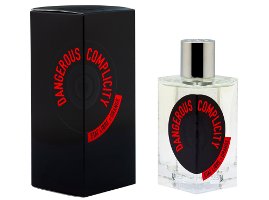 Note: top image shows fashion by Dior, Lanvin and Balmain, all via Pinterest.