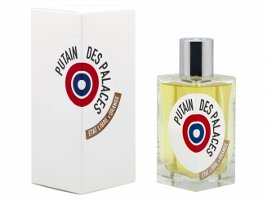 Let’s get this over with quickly so we can move on the fragrance itself: Yes, Etat Libre d’Orange Putain des Palaces’s English translation — as supplied by Etat Libre, at least — is “Hotel Slut.” And, yes, its logo (see below) is a phallic key inserted into a pink, ovoid lock. All right, we’ve got it, ha ha ha.

But “Hotel Slut” casts the wrong impression of the perfume. It sounds too cheap. After rejecting Truck Stop Floozy (not tony enough) and Penthouse Suite Slattern (really I just listed this name for the chance to use “slattern”), I think High Class Harlot is more like it.

Putain des Palaces was released in 2006 and was developed by perfumer Nathalie Feisthauer. Its notes include rose absolute, violet, leather, lily of the valley, tangerine, ginger, rice powder, amber and animal notes. For once, the list of notes is a good representation of the actual fragrance.

Putain des Palaces is an aldehydic floral juiced with ginger-spiked citrus and sandwiched between a whiff of body odor and a bed of supple stiletto leather. Its first tingly sniff is pure gingered tangerine, but within seconds it’s joined by the smell of freshly dirty armpit. The armpit smell is subtle. Rochas Femme, Amouage Jubilation 25 and Penhaligon’s Amaranthine are more overtly carnal, in my opinion.

Riding under the tangerine and soon taking center stage is the classic cosmetics combo of violet and rose. The ginger and tangerine, still present, make sure that if Putain des Palaces hints at a 1950s lipstick, it’s worn by a finishing school's party girl and not the matron. After only five minutes or so, Putain des Palaces’s leather starts to surface. The leather isn’t a rough birch tar fest, nor is it salty like suede, but it’s soft and thin and buttery.

Altogether, Putain des Palaces becomes a mosaic of disparate but oddly alluring pieces. Its ginger and tangerine smell young and fresh. The violet and roses smell traditional and prim. Animalic notes are sexy and daring. Soft leather is earthy and easy. Snap them together, and you get a Mr. Potato Head of perfume from which it is hard to turn away. It’s the unusual but surprisingly harmonious combination that keeps me coming back to the dab on my wrist.

Putain des Palaces has moderate sillage and lasts about four hours on my skin — probably a couple of hours longer than our high class harlot needs it to works its magic.