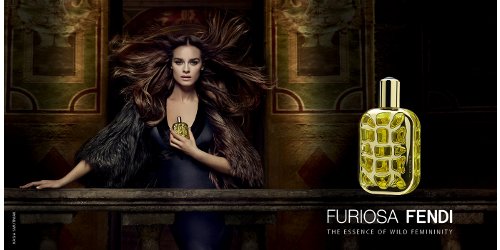 Fendi — what is the general perfumista view of Fendi, anyway? (That's a serious question, do comment). Like many of you, I adore Theorema,1 and I know the original Fendi fragrance for women is still remembered fondly. But nothing Fendi has done in my (perfumista) time has interested me. I have nothing to say about Fan di Fendi, and the brand's last pillar for women, L'Acquarossa, did not inspire any greater sentiment than hey, you could do worse.

L'Acquarossa was styled as the "red elixir of passion". Furiosa stakes its claim as "the essence of wild femininity"; in the Furiosa commercial, everything Kasia Smutniak touches takes on a glittering gold animal print to match the bottle design.2 Does it live up to its billing? Need we even ask?

No, as you probably guessed there's nothing wild or furious about Furiosa, but it's quite pretty, and easily my favorite Fendi fragrance of recent times. It's a warm spicy floral, full bodied and lush — perhaps, in these days of shower-fresh / office-ready perfumes, that makes the "wild" designation fair enough? The opening is bright and slightly fruity; the pink pepper makes a good showing but does not overwhelm (the notes: bergamot, pink pepper, jasmine, matthiola incana / stock, gardenia, incense, gaïac and amber). The blended floral heart is dense, at least by modern designer perfume standards. There's a flash of gardenia, but you'll notice the stock more; as done here, it's rather like carnation minus the clove (and given current IFRA rules, that's what carnation smells like now anyway).

My main complaint is that the incense and gaïac in the base could have just a little more presence. The lasting power is quite good, as is the sillage, but most of Furiosa's boldness fades in the later dry down, which is a cushy-creamy cosmetic powder with a dash of vanilla. With just a smidgen more darkness and oomph, Furiosa would have fit neatly into the Tom Ford signature line.

Verdict: As I said above, quite pretty. I don't predict huge numbers of perfumista fans, or that when Furiosa gets axed, it will garner the same sort of rabid following that has elevated the price of vintage Theorema on eBay, but it's very much worth sampling. If they do a 'noir' or 'intense' sort of flanker, I will be interested.3 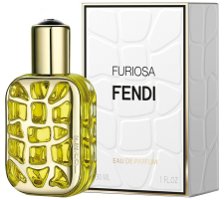 Fendi Furiosa is available in 30, 50 and 100 ml Eau de Parfum and matching body products. It is already out in some markets, including the UK and most of Europe, but I think is not expected to debut in the United States until 2015.

1. Now that perfumer Christine Nagel has joined Hermès, wouldn't it be incredible if she did some variation on Theorema under the Hermès brand name? An orange-osmanthus-cocoa Hermessence? Pretty please?

2. The bottle was done by jewelry designer Delfina Delettrez Fendi, who has her own brand but also designs pieces for the Fendi house. According to Women's Wear Daily, "Delettrez Fendi said she had drawn inspiration from Fendi’s exotic skins, and wanted the bottle to be ambiguous, possibly resembling a tortoise shell, scarab or butterfly."

3. Two suggestions from reader Rickbr, from the comments to the fragrance announcement: Furiosissima or Furiosa Nervosa. Furiosa Arrabbiato would be good too.