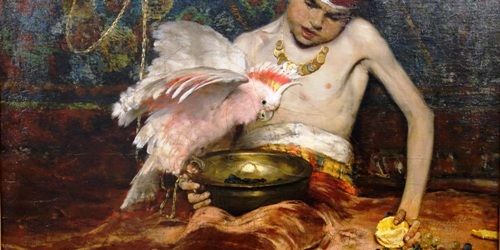 I’d love to have a magical machine; I’d place a perfume in the Per/Fume-Separator and order it: “Remove cocoa!” “Delete maté!” “Obliterate beeswax!” It would be interesting to see what notes do make a discernible difference in a scent (and truly, we can’t trust note lists all that much anyway).

Or du Sérail goes on strong and “sticky”: with spiced apples, loads of honey, shredded tobacco leaves mixed with moist grated coconut flesh, the subtle smokiness of oak wood, and a hint of dirty musk mixing with amber. If someone had put this perfume under my nose and asked me to guess the perfume house/creator I would have been dead wrong (I would've said Serge Lutens/Christopher Sheldrake, not Naomi Goodsir/Bertrand Duchaufour).

This is an easy review, because how Or du Sérail begins…Or du Sérail ends; let’s call it a solitabac since all notes, with the possible exception of coconut, are subservient to tobacco. I love the smell of tobacco, whether that note is presented sweet (as here) or slightly unclean. I liked Or du Sérail well enough on first wearing, but as I compared it side by side to other favorite tobacco scents (Costamor Tabacca, Tom Ford Private Blend Tobacco Vanille, Serge Lutens Fumerie Turque, even Viktor & Rolf Spicebomb and Diptyque Volutes), Or du Sérail smelled too dense, even leaden (of course, one person's leaden is another person's profonde). What Or du Sérail needs, for me anyway, is some of what William Merritt Chase provides in the painting I chose to illustrate this post: some cockatoo "pink" (rose? carnation? lily? guava?) and air from its fluttering wings, a glint of gold cutting through the dark sweetness — some of the sparkle of the peeled, juicy orange in the little page's hand.

Naomi Goodsir Or du Sérail, for all its heft, produces sillage for only a short time, and fades away on my skin in less than four hours; it's unisex and currently available at Luckyscent, $187 for 50 ml Eau de Parfum.