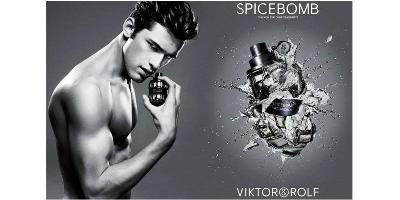 Viktor & Rolf just released Spicebomb, its second men’s fragrance (remember Antidote?) Viktor Horsting said: “We were jealous of all the women who had Flowerbomb, and we wanted to have our own bomb.”* In the same interview, Rolf Snoeren added: “We felt that if flowers were a very typical feminine scent, spices were the masculine opposite.” (Translation: Viktor & Rolf wanted to fill a grenade-shaped bottle with a men’s scent that they hope will match Flowerbomb’s great commercial success.)

I was amused that the press release for Spicebomb mentioned licensee L’Oréal didn’t do any market testing for the fragrance (they’ve been burned in many perfume reviews for the ‘market-tested’ — generic — nature of many of their offerings). Since when did giant companies make a point of denying market testing?

Perfumer Olivier Polge chimed in, “Viktor and Rolf wanted an extroverted, outspoken fragrance.”* Spicebomb’s scent is not outrageous or “new,” but the strength of the perfume (excellent lasting power and sillage) qualifies it as a “bomb” of sorts.

Spicebomb includes fragrance notes of bergamot, elemi, grapefruit, pink pepper, cinnamon, vetiver, tobacco accord, chili, saffron and leather. Spicebomb opens with sharp (cool) citrus, almost pine-y, tinged with pepper. Immediately the fragrance “warms” to reveal a streamlined and well-blended progression of non-gourmand cinnamon (to my nose, included in the perfect amount), delicate saffron-leather and tobacco notes. Spicebomb’s tobacco (somewhat like the tobacco in Serge Lutens Fumerie Turque) is ample, diffuse and elegant; it comes to the fore accompanied by a spark of chili. As Spicebomb enters its final phase, the tobacco note is sweetened (with tonka bean?). I like Spicebomb. 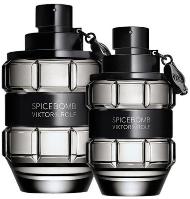 Spicebomb’s grenade bottle (nicer in photographs than in person) wants to foist a dangerous, over-the-top idea onto a nice mainstream perfume. I’m not offended by the ‘grenade’ but I’m a little embarrassed for it — like one is for a 50-year-old friend who suddenly adopts a mohawk hairstyle and starts to shop at Armani Exchange.

As for the ad campaign, Horsting said: “Here the guy is playing with the bottle, like for Flowerbomb the woman is playing with the bottle. You really don’t know what’s going to happen, so there’s a certain tension. We wanted a certain classicism — that’s why it’s black and white. That’s why he has a classically beautiful body. But at the same time there is an action that is suggestive.”* Viktor! I know what’s going to happen: nothing! It’s an ad. It’s a bottle of perfume. And we all know there’s no room in perfume ads for non-beautiful bodies, ‘classical’ or otherwise since what is “suggestive” in perfume advertising almost always revolves around SEX (the model is orally threatening to pull the “grenade” pin). The Spicebomb video is lame…and off-putting.

Spicebomb’s roll-out does sound great: merchandising units that appear as “exploding shelves,” some Spicebomb bottle sleeves with holograms that make it appear as if the bottles are exploding, and blotters in the shape of matches. My Nordstrom had a pitiful counter display of a few Spicebomb bottles, with a broken tester, no blotters, no samples and no sales assistant in sight.

Me? I don’t need Spicebomb since I have three tobacco fragrances in rotation. But if you’re looking for a semi-spicy, sweetish tobacco perfume, try it.