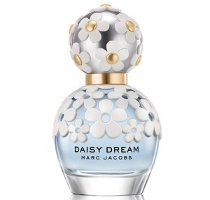 Marc Jacobs will launch Daisy Dream, a new fragrance for women, in July.  Daisy Dream is a flanker to 2007′s Daisy, and follows the recently launched Daisy Delight. we'll see another Sofia Coppola commercial; I'll update when I can.

Update: Daisy Dream will be a fruity floral with notes of blackberry, grapefruit, pear, jasmine, lychee, blue wisteria, white wood, musk and coconut water. It was developed by perfumer Alberto Morillas (who also did the original Daisy scent) and is described as a "more sophisticated, ethereal version".

Marc Jacobs Daisy Dream will be available in 30, 50 and 100 ml Eau de Toilette and in matching body products.