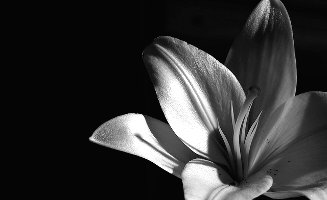 Earlier this year I cited Sa Majesté la Rose as evidence that Serge Lutens can do conventionally pretty when he wants to. Un Lys, a 1997 release and another soliflore fragrance, might be the only other scent in the line that could be used to back up the same claim. It was created by perfumer Christopher Sheldrake, and includes notes of lily, leaves, musk and vanilla.

Un Lys is rather at the other end of the spectrum from yesterday's Donna Karan Gold: you certainly wouldn't use the words crisp or sheer, and it smells nothing like a modern department store fragrance. What it smells like, in a nutshell, is lilies. Masses of them, to be more exact, and whether you find that intoxicating or a slow death by suffocation is, of course, dependent on your personal taste.

There is the tiniest hint of fresh greenery and a little whiff of lilac, and you will find the vanilla and musk, as expected, in the dry down. The vanilla in particular is quite pronounced; still, I never think of anything but lilies when wearing Un Lys. It is creamy and lush, but not at all heady after the first few minutes, and I wouldn't call it cloying so long as you don't try to bathe in it in mid-August. And while it is undeniably sexy (way more sexy, to my nose, than the Donna Karan), Un Lys never takes over; it never, like say, Fracas, feels like it is wearing me. If I could only have one lily fragrance, it would be Un Lys.

Un Lys is in the exclusive line, which means normally you can't buy it on my side of the pond, but as it happens theperfumeshoppe in Canada has limited quantities in stock at the moment (phone or email orders only, and they have a few other hard-to-find Serge Lutens scents as well, including Vetiver Oriental). When that runs out, see the listing for Serge Lutens under Perfume Houses for buying information.

Note: top image is In Loving Memory [cropped] by Sean McGrath at flickr; some rights reserved.