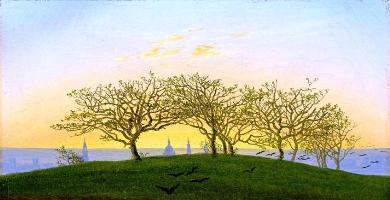 There are almost 200 perfumes on my "want-to-sniff" list. The majority of them were released in the last four years and a large percentage of them never were sold in the U.S. (Ever seen Trussardi My Land, Mäurer & Wirtz Pink Pepper & Grapefruit, Molinard Habanita L’Esprit or Charriol Royal White at your favorite American fragrance counter?) There's just too much 'product' out there!

So, how can I write about the “top 10 winter fragrances” with any authority? I can’t. My "top 10" is comprised of perfumes I've recently encountered, worn, enjoyed, and that fit my mood of the moment. I’m not including fragrances I've reviewed in the past. I’m not including lots of classic/rich "winter” fragrances because, frankly, by mid-January in Seattle, I’m sick of cold, wet weather and dark heavy perfumes. I need some sparkle in my life…some light, citrus and flowers. And let’s not forget it is SUMMER in the southern hemisphere — this post is dedicated to readers in that part of the world; I wish I could visit you all, from Argentina and Brazil on over to South Africa and Australia and the balmy lands of Asia and the South Pacific.

Ava Lux Honey presents the warm scents of hot summertime, with its floral, nutty (almond) aromas. If you love the scents of honey and beeswax and orange blossom, give this a try.

La Via del Profumo Venezia Giardini Segreti came to mind as I recently strolled through a chilled, but very fragrant, winter garden here in Seattle. The scent of cool air and spicy winter blossoms filled the air. I shall say no more, since I’ll review this fragrance before spring. (It’s a good thing I live nowhere near La Via del Profumo’s headquarters shop; but next time I’m in Italy, I’m going there…period.)

What if Brut won the Lottery and was able to ditch his drugstore digs, leave his plastic bottle behind and have a reformulation with good-quality ingredients? He’d smell an awful lot like Oliver & Co Nebula 2; it's full of great green notes, both bitter and sweet, and smooth and silky coumarin.

Union Gothic Bluebell is on my short-list to review for spring; it’s a heady and substantial take on bluebells (Hyacinthoides non-scripta); it reminds me of my grandmother (no “old-lady-perfume” comments, puh-leeze!); she and I planned many a flower bed together and we both demanded scent, vibrant scent (like Gothic Bluebell's!) of our floral charges.

The skins of pears, sometimes a bit tough, speckled with brown spots, are often hard to swallow, but heavenly to smell. Slumberhouse Pear & Olive opens with a note I’ll describe as liquor-y, almost overripe, pear peels, sweet and funky at the same time. What makes this pear appealing to me (many pear notes in perfumes are cloying/annoying) are the discordant notes added to it: oily olives (certainly cold-pressed!), a green note and a musty-bark aroma. This is a summer salad served in a hand-carved wooden bowl. 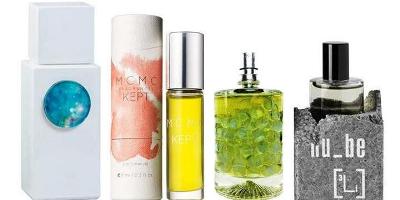 How does nu_be Lithium smell? Take one lumberjack, have him shower with a lemon-and-rose-scented soap…then make him chop down cedar trees in 90-degree heat…in a few hours, serve him a falafel, or two, for lunch. As he relaxes after eating, have him put his hands behind his head — exposing his damp, odiferous armpits. All together now: Lithium! (If you don’t like sweaty/musky perfumes, don’t go near it.)

Imaginary Authors Memoirs of a Trespasser (inspired by the imaginary writings of imaginary author Philip Sava) is at first a creamy vanilla scent, but quickly I detect sweet woods and resins (listed notes are Madagascar vanilla, guaiac, myrrh, benzoin, ambrette seeds and “oak barrels”). This is how I wish my sweaters smelled when taken out in autumn after summer storage. Though a perfect perfume for winter wear, Memoirs of a Trespasser would also make a great warm-weather woody gourmand perfume — IF applied with reason (I’m talking two spritzes maximum).

MCMC Kept gives me the proverbial Days of Wine and Roses…in a bottle. This summery rose perfume adds “blunt” notes to offset the "pink" rose; I smell straw flowers and some bubbly "prosecco." Though described as the most feminine of the MCMC line-up, Kept is in the Etat Libre d’Orange Afternoon of a Faun family and, to my nose, is unisex. Boys…get your roses on.

One of the things I love most about summer are vine-ripened tomatoes. Erik Kormann No. 7 Juli (though supposedly composed of grapefruit, tangerine, mint, jasmine, vetiver, cedar and fig leaves) smells like tomato vines and green bell peppers — a delightful scent and a simple, yet unusual, cologne.

Finally, there’s Frapin Paradis Perdu. It reminds me not only of summer, but of the seaside and the "environmental odors" of salt-dusted wooden boats bumping against barnacled wharf pilings; it also possesses a vintage men’s aftershave/soap scent (circa 1950). Paradis Perdu is retro, without being dull. This is how Bleu de Chanel COULD have smelled if it hadn't tried so hard to please everyone.

Middle images, left to right: Oliver & Co. Nebula 2, MCMC Kept, Slumberhouse Pear & Olive, nu_be Lithium; no attempt was made to make the bottles appear in correct proportion to one another!