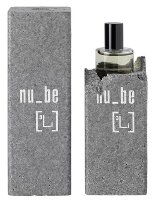 Nu_Be is the perfume line of Fluid Ounce, a Parma-based company. They debut with five fragrances: Hydrogen, Helium, Lithium, Carbon and Oxygen.

nu_be speaks of the origins of the universe, of that primordial magma that gave birth to the stars, a material still in fusion that harks back to Chaos, a state preceding finished Form. Something spiritual and cosmic that recalls the uncontaminated matter of the bowels of the Earth. The unexpected experience of an outcrop of pure materials, each hidden within another....

At its origins are Hydrogen [1H], Helium [2He] and Lithium [3Li], the three elements of the primitive explosion from which everything was born. Exuberant aromas, magnetic and restless, but enveloping and meditative, that evoke accumulation and rarefaction, the energy of a universe forming. Carbon [6C] and Oxygen [8O] then trace out the watermark of our biosphere, attracting intimate solemn atmospheres, made up of subtle currents and terrestrial memories.

Helium ~ developed by perfumer Sylvie Fischer. "On top qualitative Italian bergamot, to give some freshness. The precious iris concrete and the Damask rose for a feminine effect. Mysterious balsamic tones of benzoin, Turkish styrax and cinnamon bark. Deep patchouli and mystic guaiac wood, together with clary sage and tobacco leaves, to recreate a narghile accord, spiritual and intense. And for the smoke effect, a beautiful vetiver to sign the scent in authenticity and elegance."

Lithium ~ developed by perfumer Nicolas Bonneville. "...Slowly evoking the smell of flint, the heat after the spark. I have played with the ingredients in a harmony of contrasts: the tenacious presence of woods, cedar wood and patchouli, the softness of musk, the energy of spices and the subtleness of rose, the intensity of iris and the preciousness of saffron. Here it was, [3Li], primordial smell of flint and leather blended with the soft warmth of saffron and the ephemeral freshness of the rose."

Carbon ~ developed by perfumer Françoise Caron. "A cocktail of cold spices, cardamom and icy ginger, melted with black peppercorn and pepper blossom to stimulate an irresistible force radiating from start to end. Adding elegance and freshness with precious iris, aromatic herbs and sensual resins. Combined with the creamy scent of freshly carved sandalwood, to create the luxurious foundation of the fragrance."

Oxygen ~ developed by perfumer Antoine Lie. "Steamy and refreshing at the same time, more complex than oxygen itself. I thought of liquid oxygen in which you put pressurized woods. Then everything is boiling, you put your nose on it… And there it is, a scent you cannot catch neither capture, but that is in the air, all around you. With touches of saffron, olibanum and pepper, overdose of aldehydes and musk, and deep and earthy vetiver."

Nu_be Hydrogen, Helium, Lithium, Carbon and Oxygen are available now at Nose in Paris or First in Fragrance in Germany, €110 each for 100 ml Eau de Parfum.