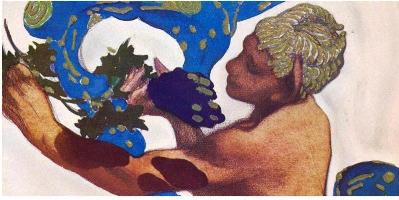 As usual, Etat Libre d’Orange loads its newish release, The Afternoon of a Faun, with lots of backstory: Stéphane Mérimée’s poem L'après-midi d'un faune, Vaslav Nijinsky’s ballet (nymphs! sex!), and…uh…Mx* Justin Vivian Bond, who is given equal credit (and ad space) for developing the fragrance with perfumer Ralf Schwieger. (I can’t believe Ralf is pleased.) There’s a world of difference between Nijinsky’s The Afternoon of a Faun and Bond’s…Shortbus (though I can’t believe Etat Libre d’Orange didn’t try for a perfume tie-in with that film); when Nijinsky is “present,” even in a still photograph or grainy film clip, everyone else pales.

The Afternoon of a Faun perfume goes on “liquor-y” — with rich citrus, a touch of jasmine, and lots of immortelle. Out of that initial triad, immortelle is heaviest and longer lasting; it dominates the next phase of development too, but in mid-development it’s augmented with whiffs of rosy incense. In its final phase, The Afternoon of a Faun presents sweet, woody myrrh accented with pepper; its base notes have a waxy sheen, as if the lingering immortelle had been dipped in beeswax. Also, in the extreme dry down, I detect toasted benzoin and lightest moss.

What has The Afternoon of a Faun to do with Nijinsky? I’ll leave it up to you. In my imagination, I could link the light, but penetrating, waxy-woody aromas with the stage boards dancers pound their poor bodies against. Incense and roses? “Holy” dance and shouts of “Bravo!” The fleeting floral notes mixing with immortelle remind me of the scents of post-performance costumes lined up on a rack, awaiting their trip to the cleaners. Moss and benzoin? Faun and nymphs, of course! See? It’s not that hard to fall into line when a perfume company leads us by the nose in a particular direction.

The Afternoon of a Faun is not strange or quirky but it’s beautifully composed and, to me, addictive (and my favorite perfume from Etat Libre d’Orange…as of today). My only warning would be: you must love immortelle to appreciate it.

*A gender-neutral honorific (used instead of Mr, Ms, etc.)

For a spooky, film image of Nijinsky dancing The Afternoon of a Faun, look here.

To see a modern, full performance of The Afternoon of a Faun, watch this.