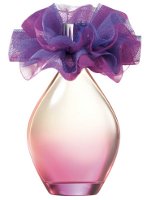 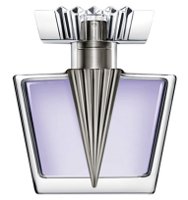 My very first perfume came from Avon: it was a light floral scent in a bottle shaped like a French schoolgirl, from a Disney-inspired "Small World" collection. My second, and third, and fourth fragrances were also purchased from Avon: I wore a lot of Sweet Honesty in my grade school years, as well as Roses, Roses and Pearls & Lace. I haven't tried any of Avon's new releases in a long time, but I've been in an experimental mood so I tried two recent scents.

Flor Violeta (above left), which was just launched this spring, is "a sweet surprise of vibrant violet blossoms, sparkling apple and dreamy musk." (It's being sold as Only Imagine outside the United States.) The actress Kate del Castillo appears in some of its promotional materials, and its tagline is "Imagination in Bloom." Flor Violeta isn't exactly "imaginative," to my nose: it's a synthetic-smelling fruity-floral-musk scent whose powdery violet note is less apparent than you'd expect, given the fragrance's name. It reminds me of any number of fragrances I've sniffed at Sephora or Victoria's Secret; to be more specific, something about it resembles DKNY Be Delicious, although it's less tart and juicy.

Flor Violeta is easy enough to wear and it's actually pretty quiet on my skin after its first hour or so. It doesn't really bother me in any way, but on the other hand, a violet-based floral could have been so much more interesting. I was hoping for a lighter, simplified take on Balenciaga Paris, so I couldn't help feeling a bit disappointed. Of course, I'm probably not the target customer; many shoppers may love it.

On the other hand, Viva (above right; released in 2012) caught me pleasantly off guard. Viva is Avon's third fragrance to be fronted by the pop star Fergie, and it's billed as "a sexy contradiction of captivating cool herbs spiked with fresh lavender and intriguing vetiver." The tagline for Viva by Fergie (as it's officially known) is "Live by your own rules," and the fragrance's bottle is Art Deco-inspired, nicely in advance of 2013's Great Gatsby trend. (It doesn't even have a logo, so if you're not a Fergie fan, you needn't worry about displaying it on your dresser.)

Viva does just what it promises: it's a streamlined floral-herbal-woods fragrance with a non-conformist streak. It opens with a greenish lavender accord that smells like a mainstream interpretation of a fougère; it's surprisingly androgynous, in any case. I think I'm also catching something anise-like and something mint-y in the composition. Viva's heart hints at a more typical "fruitchouli," with a cluster of berry-woodsy notes; it's a little more feminine than the opening, but it's still mellower and less pink-and-sweet than your average mass-market fragrance. The lavender deepens, and there actually is some vetiver in evidence: it's on the sheer side, but it's there, and it emerges and endures as Viva develops on skin. In general, Viva has excellent staying power: it lasted through an entire office work-day on my wrists.

Overall, Viva by Fergie smells more expensive than it is, and it's unusual without being strident. It could turn out to be a refreshing alternative for women who are secretly partial towards men's fragrances but aren't quite ready to cross the department store aisle. It would work especially well in warm weather, when many gourmand and oriental fragrances start to feel too heavy; and, no matter the season, you don't have to be a Black Eyed Peas fan to enjoy it.

All in all, neither of these fragrances quite brought me back to the days of my grandmother's Charisma, my mother's Odyssey, and my own Sweet Honesty, but Avon (like everyone else) has had to stay current, and it's interesting to see what they're up to these days. I think Viva deserves notice as an interesting contemporary perfume at a very reasonable price, and I'd be curious to try a few more Avon releases once in a while.

Do you have any Avon favorites, past or present, in your collection? Feel free to comment!

Avon Flor Violeta ($28) and Viva ($30) are both available as 50 ml Eau de Parfum. For purchasing information, see the listing for Avon under Perfume Houses.