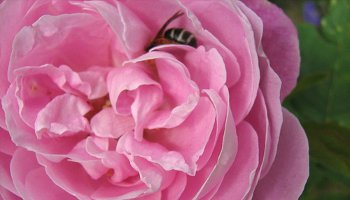 My garden is crazy with roses these days. They splash pink and mauve near the street and waft fruity, peppery fragrance to my neighbors’ porches. I’m greedy with them, and four vases of Madame Isaac Pereire, La Reine Victoria, and Jude the Obscure in varying stages of decrepitude crowd the dining room table (I love their perfume best just as they start to shrivel), and another few vases are crammed on the mantle.

But other than on the stem, the scent of roses doesn’t move me. Sure, I love the occasional spritz of Guerlain Nahéma when I’m feeling over the top, and a dose of Parfum d’Empire Eau Suave is marvelously fresh on a warm day, but otherwise rose can feel institutional and even dowdy. But now, when my garden is flush with roses, it seems right to revisit two often overlooked rose-centered fragrances: Lancôme Miracle and Estée Lauder Intuition.

Of the two fragrances, Lancôme Miracle is the most rosy, although it’s a rose loaded with black pepper and tinged with vetiver and musk. Miracle, developed by perfumer Alberto Morillas with Harry Fremont, launched in 2000. Its notes include lychee, freesia, magnolia, ginger, pepper, musk, amber and jasmine. 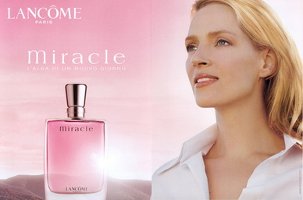 Miracle is a fresh, black pepper-laden rose that smells just like what is broadcast through the lobby at a fancy hotel near my office. It’s a touch fruity, but not enough to make your mouth water. It’s green, but not tart or edgy. It’s spicy, but not enough to be pushy. It’s clean, but you wouldn’t mistake it for detergent — at least not for grocery store detergent.

It’s difficult to whip up any strong emotion about Miracle, including dislike. I wouldn’t mind a gallon-sized bottle of Miracle to use when I wash lingerie, and I’d recommend it with confidence on Mother’s Day, no matter who Mom is. Miracle is a sure bet, but unlikely to kindle passion. 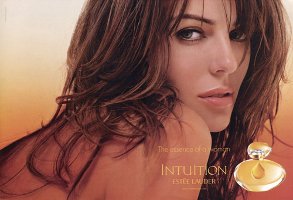 Intuition is a more sultry take on rose, with a heavier hit of musk, amber, and powder. Intuition kicks off with grapefruit-heavy citrus, but rose-powder-amber are evident from the start. A streak of stemmy green runs through the composition, keeping Intuition’s powdery heart from veering into Kotex territory.

As the perfume ages on skin, a sweet musk emerges, and the powder dies down. This sweet musk — not a clean nor hippie nor skanky musk, but a sweet woody musk — lasts for hours. Intuition comes off as wanting to be sexy but not wanting to offend. The result is comfortable and benign, sort of like an over-powdered auntie with a withered décolletage and lots of good stories.

Neither Miracle nor Intuition rocks my world enough to inspire me to buy a bottle, and the minis I have will probably go sour before I can use them. But both fragrances are pleasant and easy. Given some of the aggressively musky-woody fragrances launched at the mall over the past few years (I sampled Dolce & Gabbana The One Desire a few days ago and felt like someone had jammed an ice pick up my nose) I’m feeling nostalgic for the pretty even if slightly industrial mass-market releases of the early 2000s.