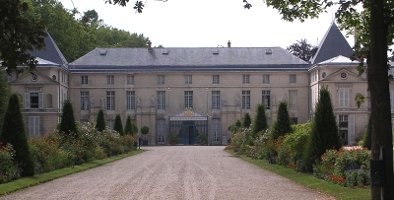 When my friend Maryann opened the door to greet me, she said, "You smell nice! At least it must be you, since nothing out front is in bloom yet." It was late April and not even lilacs or lilies of the valley bloomed, let alone roses. But standing in the doorway I knew Maryann recognized the faint fragrance of an early summer garden in the morning, because I wore Parfum d'Empire Eau Suave Eau de Parfum.

In 2003, Marc Antoine Corticciato, the perfumer behind Parfum d'Empire, created Eau Suave in homage to Josephine's Chateau de Malmaison, famed for its gardens including 250 varieties of rose. In an article on Malmaison, Princess Michael of Kent wrote that roses were a natural for Josephine:

Josephine was christened Marie-Joséphe Rose Tascher de la Pagerie and she would be known as "Rose" from her birth until the day when the young General Bonaparte (who made a habit of changing women's names) began a letter with: "Sweet and incomparable Josephine. I awake full of you and of the memory of our intoxicating night..." From that moment she would enter history as Josephine.

Pretty cheeky of Napoleon to change her name, but I guess you don't get to rule most of Europe without being at least a little domineering.

Princess Michael says that Napoleon and Josephine bought Malmaison together, but Wikipedia's entry on Malmaison claims that Josephine waited until Napoleon was out of town raiding Egypt before she bought the chateau, which was at the time a dilapidated money pit. Initially Napoleon was upset that Josephine had counted on loot from his conquests to pay for the chateau, but eventually he came around and even purchased an additional 5,000 acres nearby. Josephine renovated Malmaison, filling the entry hall with tropical plants and free-flying birds, and she attacked the grounds in earnest, even going to far as to get a passport for her London-based plants vendor so that he could personally escort shipments of jasmine, dahlias, tree peonies — all plants then rarely seen in France — to Malmaison. She had a gigantic greenhouse constructed with a dozen coal-burning stoves to warm it, and she filled an orangerie with 300 pineapple trees. Zebras, black swans, and kangaroos roamed the grounds. In short, Josephine put Martha Stewart to shame. (The official Malmaison website offers a terrific virtual tour of the chateau.)

In Eau Suave, Corticciato created what he calls a "modern chypre" focused on Josephine's roses, and specifically on what the Parfum d'Empire website calls the "misunderstood" aspects of roses. He evoked spicy roses through coriander, saffron, and pepper; fruity roses through peach, raspberry, and apricot; and tea rose to lighten the composition. Oakmoss, white musk, and patchouli ground Eau Suave.

If Eau Suave is the fragrance of a garden in bloom, it's not a lush, heady garden of jasmine and lilies, but a more restrained garden, quiet, with pea gravel paths and bird baths and lots of places to sit with a book. Yes, the garden has roses, but the stem and leaves of the bush and even a hint of the spicy greens of the adjacent kitchen garden sneak in, making Eau Suave less about bouquets of roses than about the garden as a whole. Eau Suave goes on gently and wears more like an Eau de Toilette than an Eau de Parfum. It's mid-afternoon now, and I can still smell this morning's application of Eau Suave, but only within an inch of my skin.

I love Josephine's vision for Malmaison. I've crammed a garden on my urban lot and look forward to a summer of figs, plums, dahlias, and currants beside the usual tomatoes, pole beans, and zucchini. I have a handful of fragrant Bourbon roses planted in front. I'll read magazines on a rusty chaise and have people over for backyard dinners on warm nights. No zebras or black swans roam here, but the dog will dig himself a cool bed in the dirt under the raspberries, and I'll watch the cat bat at the occasional fly against the inside of my office window. Maybe it's no chateau, but it's home. And I do have Eau Suave.

Parfum d'Empire Eau Suave is an Eau de Parfum and is sold in a pretty, columnar 100 ml bottle with a mauve painted label. For information on where to buy it, see Parfum d'Empire under Perfume Houses.