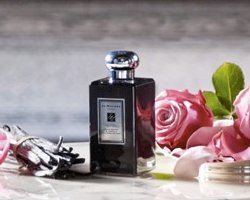 I tried Jo Malone's Rose Water & Vanilla when it was first released, but since I was under the impression that the "Cologne Intense Collection" (which included Rose Water & Vanilla) was a limited edition line, I didn't bother to review it. Now that it seems to have become part of the permanent collection, I've revisited it and I'm still intrigued.

The Cologne Intense Collection is a group of "distinctive scents inspired by the rich, sensory experience of the Middle East," and Rose Water & Vanilla is inspired by "delectable Turkish Delight": "Rose Water and comforting vanilla are enriched with a succulent bite of rose loukoum. Tempting and addictive." Elsewhere, Jo Malone describes this fragrance as "an elegant powdery scent that blends spicy sweet Orange Blossoms, the richness of Vanilla and an underlying smokiness from the agarwood."

I'm sure I'm not the only one who looks back with fondness on the craze for loukhoum-inspired fragrances that swept through various perfume message boards in 2004. How does Rose Water & Vanilla fit into that genre, a decade after the niche trend began? It's certainly a gourmand perfume, and as Jo Malone's descriptions promise, it is sweet and it is powdery. It's probably more dessert-like than anything that the company has previously released, and since many customers probably haven't been exposed to earlier loukhoum fragrances like Serge Lutens Rahät Loukhoum (1998!) or Montale Sweet Oriental Dream, its sugared-almond and candied-floral notes may seem new and unusual.

On the other hand, Rose Water & Vanilla is more feminine than either of the fragrances I've just mentioned, and it doesn't include any hints of pipe tobacco or alcohol. Instead, just as its name suggests, it emphasizes Turkish Delight's flowery, sugary side. It starts off with a wave of orange blossom and heliotrope, followed by a clean almond (no Play-Doh here!), some very pretty rose petals, and a smooth, aromatic note that may or may not be agarwood. (I don't even trust myself to recognize agarwood/oud anymore, since it's everywhere and nowhere at the same time.) Rose Water & Vanilla's base includes a soft, creamy almond-vanilla as well as a gentle, fuzzy musk.

This fragrance reminds me of one older Turkish Delight-themed fragrance in particular: Keiko Mecheri Loukhoum, a cult favorite that was released in 2000. Rose Water & Vanilla feels like a lighter iteration of Loukhoum, with the cherry opening deleted and the pillowy almond-hawthorn-vanilla blend dialed down. Although Rose Water & Vanilla seems somewhat intense and pâtisserie-like in its initial application, and it's certainly one of the richer and longer-lasting Jo Malone fragrances that I've tried, it quiets down and stays closer to the skin after its first hour. As much as I used to love Loukhoum, I found myself wearing it less and less often when I began a full-time office job and married someone who doesn't like strongly gourmand fragrances. I can imagine wearing Rose Water & Vanilla more regularly; it's a bit flatter than Loukhoum, but it's certainly more adaptable. (I think I've even been smelling it on a fellow commuter during some recent morning bus rides.)

Did you take part in the loukhoum niche-fragrance trend of the early 2000s, and if so, are you still wearing any of your favorites? Or is the idea of a Turkish Delight perfume new to you? Either way, have you tried Rose Water & Vanilla? Please feel free to share in the comments!