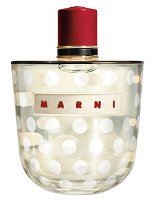 Because it’s a perfume that’s quite individual, that doesn’t evoke anything in particular. It’s for a woman who dresses for herself, who doesn’t follow trends but is sophisticated and also maybe a little eccentric.1

That's Consuelo Castiglioni, founder and designer of the Italian fashion house Marni, talking about the brand's recently-launched debut fragrance.2 Marni has been around since 1994, but I had never heard of them — not unusual given how little attention I pay to fashion, and if the fragrance takes off, it won't be the first time that a luxury designer is best known for an affordable perfume — Viktor & Rolf, anyone?3 The thing that caught my eye right away was the packaging, which is sophisticated and also maybe a little eccentric, and which is also excellent good fun; plus, it doesn't remind me of any other bottle I can think of — how often does that happen now that we're getting 1000+ new fragrances a year? Also a plus: Estee Lauder holds the license and the perfumer is Daniela Andrier. Double bonus points: Consuelo Castiglioni apparently doesn't like fruit, flowers or sweet. I don't dislike any of those, mind you, but we get plenty enough of them on the fragrance counters already.

Despite Ms. Castiglioni's preferences, Marni starts with a little whoosh of fruit, tinged green and mingling with bright citrus, but it's not sweet, and neither the fruit nor the flowers take over the proceedings (the notes: bergamot, cinnamon, clove, nutmeg, ginger, cardamom, pink pepper, rose, incense, vetiver, cedar and patchouli). Rather, Marni does for a spicy woods what Prada's Infusion d'Iris does for iris and Maison Martin Margiela Untitled does for green — it turns what could, in this case, have been a heavy oriental into an enveloping veil of scent with a modern feel. It's crisp and bright at first, gradually turning spicier (emphasis, to my nose, on the cinnamon) and woodier, with a darkish undercurrent of rose (they are calling it a 'black rose') and a powdery finish to the dry down. It has a little more presence than Infusion or Untitled, but only a little — it's still more subdued than not.

Like the the other Andrier scents mentioned just above, Marni is more wearable than quirky, but it doesn't smell like they went for the easy money. As advertised, it's sophisticated, and while I wouldn't go so far as "eccentric", it's certainly different enough from most of what you'll find on department store fragrance counters. They wanted a touch of masculine,4 and I guess they got it — I should think anybody, man or woman, could wear Marni. I should also think it could be worn nearly anywhere, in nearly any weather, and the lasting power is quite good.

Verdict: Marni is terrifically well done, and I liked it right away. It's a perfect "go-to perfume", and I predict it will find many fans among perfumistas. Hopefully, it will do well with non-perfumistas as well. I do not need a bottle, and am glad to put that in print so as to remind myself that I do NOT need a bottle, because even though I REALLY do NOT need a bottle (third time's a charm?) I am mightily tempted by that 10 ml spray, which is cute as a button. If I did not have the spicy woods category pretty well covered, it would go on my buy list. As it stands, it is NOT on my buy list, and we'll just have to wait and see if I end up buying it anyway.

2. According to the Independent, "The word most often associated with the design signature of Marni is quirky". Via Marni Mania: Consuelo Castiglioni collaborates with H&M at the Independent.

3. A point made by Consuelo's daughter, Carolina, in an interview with Style.com: "I also think that with the fragrance, we will reach a wider audience. Of course, there are many women, or girls, who cannot afford a Marni piece, but they can follow our style starting from the fragrance." Side note: Diesel's Renzo Rosso now owns a controlling interest in Marni, Maison Martin Margiela and Viktor & Rolf.

4. Carolina Castiglioni again: she noted that they wanted "to have more of a masculine fragrance, but with a touch of femininity." Trudi Loren, in the video linked above, calls it "almost slightly masculine".