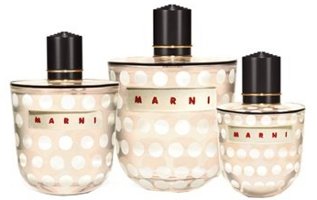 Still, Marni was one of my favorite fragrance releases of 2013, and Marni Rose now joins the "best of" list as one of my favorite flankers of the year.1 It does exactly what a flanker ought to do: explores facets of the original fragrance whilst still being similar enough to justify keeping the name and the packaging (they've tinted the bottle in shades of pink, and switched the red cap for a black one). You could very reasonably want to own both, and you could just as easily find that you liked Marni Rose even if you didn't quite love Marni (and vice versa: Marni lovers, do not buy unsniffed).

Marni Rose tones down the spice and the "touch of masculine" imparted to the original Marni by the dry, darkish base notes, and amps up the floral and gourmand notes. The opening is bright and fruity, but quietly so in comparison to most mainstream fragrances — this is not a sweet fruit bomb. The heart is a pretty pale rose, lively at first, then subdued, with a mild but persistent undertone of almond. There is just enough violet to make a nod towards classic boudoir rose-violet blends, but no more than a nod, and the base is paler than Marni's, and a bit more powdery-smooth.

Verdict: Quite nicely done. Marni Rose leans more conventionally feminine than the original Marni, but like the original, it's both wearable and sophisticated, and it's quiet enough that it could easily be worn by anybody in any weather. I did not find the original at all quirky; Marni Rose is arguably less so. If given the choice, I'd probably go with the original, but they do layer beautifully, in fact, I like the two fragrances layered better than I like either of them on its own. So purse sprays of each would make a nice compromise, no?

Now taking votes: what do you think was the best flanker of 2013? 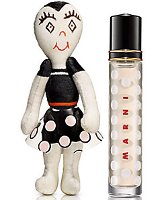 1. Or at least I thought Marni (original) debuted this year, in January, but the PR materials for Marni Rose say it's being released on the first anniversary of Marni. So either Marni launched somewhere on earth in 2012, or they just wanted to get Marni Rose out a bit early for the holiday shopping season.