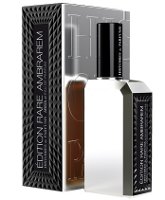 Amber fragrances are the buttercream frosting of the perfume world. They’re easy to like and easy to get sick of. Nonetheless, it’s hard to imagine not having a little amber in your perfume collection to reach for when you’re cold and cranky and need the perfume equivalent of sweet comfort food.

The thing with amber fragrances, though, is that they've been done over and over. How do you make them new? When I saw the tome-shaped bottle for Histoires de Parfums Edition Rare Ambrarem, I wondered what the spin on amber would be this time. Citrus? Spice, maybe? No. I should have guessed: oud.

Just after it's sprayed on skin, Ambrarem's amber-oud combination is cool and almost herbal. Ambrarem's oud isn't the peaty, bandaid-smelling oud, but oud boosted by saffron — it smells like oysters and the ocean. The amber is soft, not sticky-sweet at all. Rooty iris ties it all together in an intriguing fresh-warm combination. (Here the iris is just a bit player and not as vivid or fruity as in Amouage Opus V's iris-oud mix.) At this point, Ambrarem smells promising for an amber fragrance, but don't pull out your wallet yet.

Soon, like a garbage freighter chugging into the bay, Ambrarem's castoreum appears. At first, the castoreum wafts gently above the fragrance's sweet sea air. But over half an hour or so, the funk builds until you wonder if a water buffalo died under the house. If you love Guerlain Jicky's fetid squirrel aspect, you'll adore Ambrarem at this point. If you wrinkle your nose at civet and other notes with a hint of the derrière, back off from the tester.

After a few hours, the ocean and funk melt away leaving nothing but amber. Plain old head shop amber. The amber shimmers sweetly, but you can get that in Pacifica Spanish Amber, too. During Ambrarem's final throes, vanilla jumps in. Ambrarem has rich sillage and lasts all day on my skin.

For the amber lover with no fear of intense animalic notes, Ambrarem is definitely worth a try. I love an animalic edge to a complex perfume — for instance, the whiff of trash in vintage Christian Dior Dioressence is the dash of salt that makes the fragrance for me. But Ambrarem's amber-funk feels out of balance. You might like it better.

What perfumes do you reach for when you need a hit of amber?