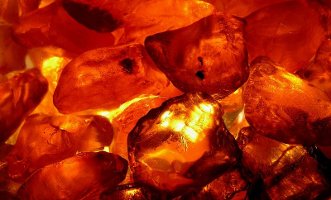 We've seen a few amber-focused fragrances surfacing amongst the new releases of late 2011 and early 2012, and that's fine with me: I'm tired of oud being the "it" note, since I don't care for it at all, and I usually enjoy some amber in my floral fragrances. Two of the recent arrivals are Aroma M Geisha Amber Rouge, a sister fragrance to the line's Geisha Rouge, and Atelier Cologne Amber Nue.

Aroma M's Geisha Amber Rouge (shown below right) perfume oil is packaged in a roll-on dispenser wrapped in the line's signature Japanese paper, and the notes of its composition include amber, cinnamon, clove, star anise, resins, and incense. It's much less peppery-clovey than the original Geisha Rouge, if I remember Rouge correctly. Overall, it's a spiced honey fragrance, with a dash of cinnamon and a boozy, brandy-like note. There's a cushion of vanilla and anise in the base, and just in case you're looking for a Valentine's Day fragrance, you might want to remember that these two notes supposedly have aphrodisiac powers. One of the "resins" seems to be a sweet benzoin. As an aside, I greatly prefer Amber Rouge to the big recent release Prada Candy, whose caramelly take on benzoin-and-woods had a queasy effect on me. Amber Rouge has very good staying power and low sillage.

Atelier Cologne's Amber Nue (shown above left) includes notes of green mandarin, bergamot, tajete, orchid nigritella rubra, cinnamon, benzoin, cistus labdanum, patchouli, and tonka bean. Amber Nue's overall effect is quite different from Amber Rouge's syrupy warmth: it's a woody-citrus variation on amber, beginning with an orange-and-lemon accord in its top notes and settling down into a lightly resiny sandalwood. The spicy red cinnamon note also makes an appearance, remaining along the margins of the fragrance. Amber Nue starts out strong and then lightens up and settles down quickly. I thought it was gone after a few hours, but then I noticed its tonka-inflected dry down just barely present on my skin. This lighter, drier reworking of amber, including that citrus motif, keeps Amber Nue consistent with Atelier's reinterpretation of the traditional "cologne" idea. It's more unisex than Geisha Amber Rouge, perhaps skewing slightly masculine. (It would also make a fantastic candle scent.)

Overall, these are two very different imaginings of a classic "Oriental" theme in fragrance, but amber is an idea that leaves room for interpretation, so I enjoyed both ideas. (I found this post on Perfume Shrine to be useful when I was thinking about amber this week.) Will there be more ambers to come? Very possibly, but I'm willing to follow the trend a while longer.