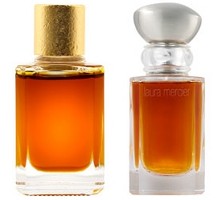 Amber fragrances can pose a conundrum. On one hand, amber is warm, easy, and seductive — a crowd pleaser. When it's cold out, a spritz of an amber-based perfume or burning an amber-scented candle are almost as good as pulling up a thickly knit blanket. When I wear amber, I get compliments. Everyone should have an amber in his fragrance collection.

On the other hand, amber is sweet and can cloy, making for suffocating, cilia-searing juice. After a few hours of wearing some ambers I feel like I'm clamped in a trap in a cheap candle shop and the ventilation has shut down. I have to gnaw off my arm to escape. Plus, amber can be boring. (Vanilla fragrances can have these same advantages and drawbacks.)

Ambre Passion Velvet smells of sweet amber, sure, but right away an infusion of almost skin-like saffron cuts the syrup. The fragrance's florals only register as maybe 10 percent of what I smell, but it's enough rose to freshen the amber and enough jasmine to make it diffusive and lighter than many caramel-like amber fragrances. Ambre Passion Velvet is only faintly spicy and smoky, and those aspects of the fragrance come out after it's been on skin for a few hours. As the scent ages, the saffron fades, and its ambery sweetness turns vanillic.

Ambre Passion Velvet has stealth sillage, and just when I think it's disappeared, someone arm's length away will tell me how good I smell. It lasts about five hours on me and comes in a bottle with a satisfyingly heavy lid and an atomizer that makes an especially fine mist.

Ambre Passion Elixir is a more concentrated version of Ambre Passion Velvet. The Elixir has the same dreamy saffron as the Velvet, but I smell more apricot and patchouli. The Elixir also lasts a few hours longer than the Velvet. While the Velvet melds into a seamless blend, the Elixir seems to stay more distinct. I can smell its components more clearly.

The biggest disadvantage to the Elixir is that it's a topaz-colored oil. If you don't let the Elixir dry before you get dressed, you'll be washing a golden blot out of the cuff of your silk blouse (listen to the voice of experience, my friends.) Between the Elixir and the Velvet, I'd probably choose the Velvet because I like spraying fragrances, it doesn't stain like the Elixir, the Velvet isn't significantly different smelling than the Elixir, five hours wear is plenty for me, and it costs $50 less.