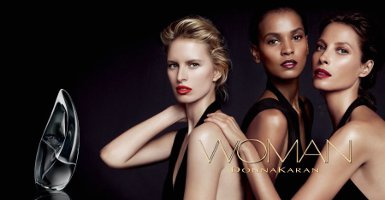 Just like a woman, the fragrance is a dichotomy of softness and strength. Utilizing ingredients that are traditionally found in masculine fragrances and wrapping them with nurturing white florals, Donna Karan and [perfumer] Anne Flipo’s groundbreaking creation results in a feminine and sensual scent: the confident signature core of sandalwood and Haitian vetiver is sublimated with the creamy feminine notes of orange flower resonating in an instinctual feminine sensuality.
— Donna Karan Woman press materials

Why this should be a selling point — for women! men's fragrances advertised as having a feminine side are as rare as dodo birds2 — is beyond me, but apparently it is, and I'll say this for the new Donna Karan Woman, it delivers, at least on this particular point. Donna Karan Woman is closer to feminine than masculine, but not by much. If you put it in a different bottle and tweaked the top notes a bit, you'd have a Donna Karan Man.

The start is a fairly conventional blend of citrus and fruity notes. After that, it's a floral woody musk scent, with the emphasis on the woods more than the florals. It reminds me of Estee Lauder Sensuous3 — they don't smell at all alike, and Donna Karan Woman is darker, and far less candied and ambery, but they share an "atmospheric floralcy" and a sort of stylized idea of wood. Another way of putting it is that Donna Karan Woman is too smoothed over and well-blended to smell like any particular notes to me; of the three notes listed in the press materials — orange blossom, sandalwood and vetiver — only the sandalwood stands out. There's no earthiness to speak of, and it's a bit darker than you'd expect from that list of notes. There's probably some cleaned up patchouli and/or dark woods in the mix.

The first time I wore Donna Karan Woman, it was a very hot and humid day, and it struck me as definitely a fall- or winter-weight fragrance. On subsequent tries, on cooler and less humid days, it has seemed much quieter. It's not exactly sheer, but it gets more so as it dries down, and it has an aura of softness despite the dark woods. After the first 30 minutes or so, it's nearly linear, although it does get mildly creamier in the far dry down, and eventually, it takes on a powdery finish.

It's been a good long time since the last pillar launch for the Donna Karan Beauty line (the DKNY range, of course, keeps itself plenty busy with all those apples). That was in 2006, with Donna Karan Gold, a wonderful fragrance that never found its audience. I keep hoping they'll move it into the less widely distributed "Donna Karan Collection", where it can live out its days with the likes of Black Cashmere, Chaos and Fuel,4 all of them bankrolled by the sales of Cashmere Mist and its flankers.

So I had high hopes for Donna Karan Woman. And it is well done. It doesn't smell like everything else on the market, and it didn't bore me to tears. It has more dignity than your average feminine launch — it's hard to imagine this scent done in pink juice and bottled with vinyl flowers. I enjoyed wearing it, and if I had a bottle, I'm sure I'd go on wearing it from time to time. But I'm not wild about it. The more I wore it, the more I started thinking about what I could layer it with to add a bit more oomph. This for a woman who has grown past, say, DKNY Be Delicious, and who finds Sensuous too sweet, but isn't quite ready to let her hair down with something as unruly as Black Cashmere. Hopefully that will appeal to many women, but it isn't a gap I need to fill in my own perfume collection.

Donna Karan Woman is available in 50 and 100 ml Eau de Parfum and in matching body products.

1. That specific wording is from Gwen Stefani L.A.M.B. And Gucci by Gucci was meant to 'unleash' Frida Giannini's “affinity for masculine notes”. Juliette Has A Gun Calamity J was reportedly a "masculine scent for women", and Elle Yves Saint Laurent was supposed to be a feminine with “a touch of the masculine”. Fergie said she was "playing with the masculine and feminine sides of the female" with her new Viva scent for Avon. And so on and so forth. I can't even keep track of them all.

2. And if I had a nickel for every men's fragrance that was advertised as "unapologetically masculine" or some such, I'd have my own chain of coffee boutiques.

4. Although as much as I liked Gold, it's arguably not really of that caliber. Or is it? Do add your opinion in the comments.