Risqué ideas and images are nothing new to Etat Libre d’Orange: the company presents us with closet queens, chubby utility workers (with a label showing buttocks cleavage), blond pubic hair (Vraie Blonde), gay beefcake (Tom of Finland), a threesome engaged in oral sex (Archives 69), and a couple of penises (one substituting for a pistol barrel — Je Suis un Homme — the other erect and “spurting”  — Sécrétions Magnifiques).  Now there’s Philippine Houseboy, whose tagline, fils de dieu, du riz et des agrumes*, has been put into use in North America as the fragrance name (you can apparently still buy this perfume in the Philippine Houseboy bottle in Europe).

Fils de Dieu opens with gingery lime, and “green” coriander and pungent shiso leaf. As the sprightly opening notes begin to disappear (and they disappear fast), the scent of “nutty” coconut makes a brief appearance and then…? Fils de Dieu begins to disappear. Was that IT? 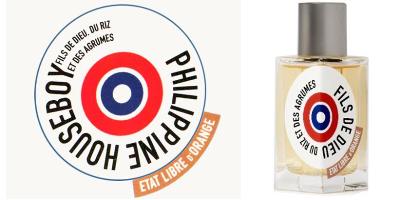 Fils de Dieu is one of those scents that falters and then makes a comeback. After the opening fizzles, the comeback notes are mild jasmine, hazy vetiver, dry, tonka bean-scented rice (to my nose, this is more a toasted rice note, not steamed rice or rice pudding) and…leather (the most “background,” powdery, see-thru leather note you can imagine). Fils de Dieu’s rose note is very mild; it disappeared quickly on my skin, but I could detect it on my shirt for hours. Fils de Dieu’s base notes smell of shamefaced musk (certainly not the bold castoreum I was expecting) mingling with a light amber-y accord.

There’s not a jarring moment in Fils de Dieu; though some of its notes sound ridiculously mismatched, Fils de Dieu is not a quirky fragrance. Fils de Dieu is only semi-tropical and, for me, doesn’t conjure a houseboy, a sunny god, or the Philippines (or any Southeast Asian locale).  Fils de Dieu does remind me of old-style, lightly spiced white floral feminine French perfumes from long ago. A better name for this fragrance, and suitably jolting, would have been the famed words of French actress/singer Arletty, who defended her WWII affair with a German officer during the Occupation by saying: “My heart is French, but my ass is international.”

Etat Libre d’Orange classifies Fils de Dieu as unisex (to me, it’s feminine in character); it has average strength and sillage, 50 ml for $80.

* son of god, rice and citrus

Etat Libre d’Orange The Afternoon of a Faun ~ fragrance review