Princess Night is the fifth flanker in Vera Wang’s ever popular Princess franchise. It came out last December, so I’m late, and I know all of you have been holding your breath through the winter, waiting to hear what I think of it… 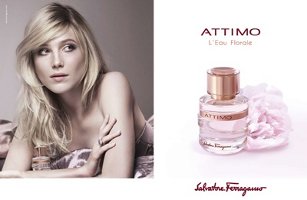 Salvatore Ferragamo has launched Attimo L’Eau Florale. The new perfume for women is a flanker to last year’s Attimo, and like that scent, is fronted by model Dree Hemingway… 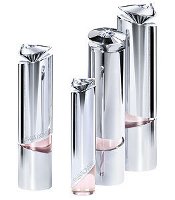 Crystal brand Swarovski will launch Aura by Swarovski in March of next year. The new fragrance was developed under licensing arrangements with Clarins, and is “described as an incandescent fruity floral which is centred around a prism of energy”… 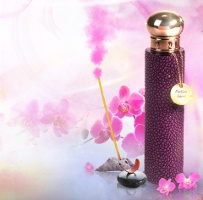 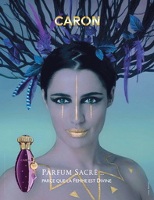 Due to the charms of the owner of the Perfume House, for a while it seemed every perfume lover in Portland had a bottle of Caron Parfum Sacré on her dresser. In the 1990s, if you were lucky enough to be at the store when the owner was there, he might pull you into a tiny side room and ask you to sit on one of the two ice cream parlor-style chairs against the wall. Then, he would present Parfum Sacré, “the greatest memory perfume” and “one of the top 10 fragrances in the world”.

When I heard the story more than a decade ago, I remember the owner, grey suited and speaking with a Europe-tinged accent, gesticulating fervently. Backed by a glass cabinet full of Annick Goutal bottles, he talked about Parfum Sacré’s launch in Portland. At the end of the story he said, “I told them, ‘Wait’,” here he touched his wristwatch, “In 37 minutes—” (or was it 67 or maybe an hour and 47?) “—they will be back. Thirty-seven minutes later so many of them came back to buy the fragrance the police had to close the streets!”

Did the Portland police really turn out to control traffic snarls caused by manic perfume buyers? Who cares? I love a good story told with passion…

Salvatore Ferragamo will launch Attimo, a new floral fragrance for women that captures ‘the essence of Italian style’, in September. Attimo will be fronted by model Dree Hemingway…