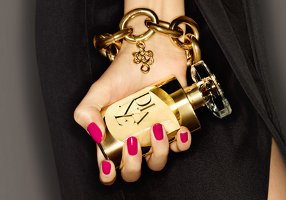 Count me as a Diane von Furstenberg fan from way back. I read her beauty book/memoir when I was in college and felt we must be sisters. Maybe I didn’t marry a prince or launch a fashion empire, but I sure understood her struggles with curly, frizzy hair. When she re-launched her clothing business, I snapped up silk jersey dresses when I could, and now I have seven of them, plus two skirts and a blouse. The flattering cuts, the easy fit, the exuberant prints — I loved it all. Naturally, I dogged perfume counters when Diane Von Furstenberg Diane came out. Verdict? Sadly, not for me.

Diane von Furstenberg describes Diane as a "woody floral" fragrance and says it is “powerful and seductive, without being aggressive.” Perfumer Aurélien Guichard developed Diane, and notes include frangipani, violet, patchouli, myrrh, and musk. That list of notes is seductive, seemingly paving the way for a fragrance with an oriental twist: alluring, earthy, and feminine. Not so on skin. In a nutshell, Diane smells to me like a rose chypre someone tried to wash off with the lily of the valley soap normally kept for show in the guest bathroom.

Gosh, I wanted to love Diane. I even like the bottle, which has garnered some complaints online. I gave it a second, then a third and fourth round of skin-slicking spritzes. Right off the bat I smell nose-tingling aldehydes that say clean clean clean, like Narciso Rodriguez Essence.  Beyond the fizzy halo is what smells to me like rose with a barely fruity tinge that must be the frangipani and the candy perfume of violet.

Eventually the rose settles in more resolutely, along with a hint of patchouli, but Diane always feels vaporous and light — almost ozonic — behind its wash of clean musk. Remember Natori? Natori settled heavy-hitting florals behind a classic aldehydic veil that lifted it into an almost retro, elegant fragrance. Many people found Natori too subtle and fizzy for their taste. Natori, with its spicy floral heart, is actually more assertive than Diane. Diane cleanses its florals in a musky laundry soap so that there is little left to make my mouth water. A touch of mossy funk does live in Diane, but it's subservient to the soapy clean overlying it.

To me, Diane doesn’t fulfill its mission of suggesting power and seduction. I don’t need a bombshell oriental to go there — on the contrary, there’s something off-putting about a fragrance that tries too hard to be sexy. That’s what I like about Diane von Furstenberg’s dresses. They’re sexy, but with a wink. Frankly, I find Diane to be demure to the point of passivity. Demure and not overly imaginative.

On the other hand, Diane’s reined-in nature makes it perfect for office wear, and it’s good value for the money. Although the fragrance is quiet and clean, it wears like iron. A few spritzes of the Eau de Parfum applied before breakfast last until well after dinner. No one will complain about it, either. Diane is clean and friendly, and many people who find Bath and Body Words Japanese Cherry Blossom hand lotion troublesome won’t raise an eyebrow at Diane’s soapy, watery rose as it dries down.

Am I crazy? Am I missing something about Diane that I should be cluing into? Please let me know what you think. Or, if you haven’t smelled Diane, tell me what you imagine her perfume would smell like.