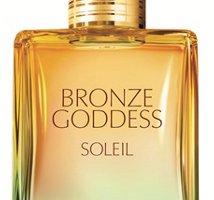 When I reviewed the original Azuree Soleil Eau Fraiche Skinscent — part of the Tom Ford collection for Estee Lauder way back in 2007, before Tom Ford started his own line1 — I said it was "a mood as much as a fragrance". The mood is vacation, if you will allow that vacation can be a mood, and the kind of vacation is tropical beach vacation. That explains why I wear it so much despite the fact that it's hardly the best or the brightest or the most artistic fragrance in my collection. In the winter, who doesn't need a little tropical vacation now and then? And in the summer, it's one of those no-thought-required, works-anywhere-anytime fragrances that everyone needs in their arsenal. More than once, it's been the only fragrance I've actually reached for while on a real vacation, at a real beach.

So, Azuree Soleil, as some of you will remember, was a one-shot limited edition and it sold out pretty quickly, but it came back the next year, only slightly altered, as Bronze Goddess. It came back again, and sold out again, in 2009 and 2010.

For 2011, Bronze Goddess has returned once again, and this time it's brought along a buddy: Bronze Goddess Soleil. Now, Bronze Goddess, the original, is your basic coconut-suntan-oil-but-better scent, sweet but not too sweet, tropical but not overwhelming about it. Worn lightly (which isn't hard to do since it's a light scent), it really functions as something of a background smell and an immediate mood-lifter. There isn't anything else quite like it on the market.

Bronze Goddess Soleil might be the new version for someone who doesn't like coconut. I thought Bronze Goddess was a bit sharper and more citrus-y in the opening than Azuree Soleil; for Bronze Goddess Soleil, the citrus is far heavier and sharper still. It's also greener, and the citrus lasts longer before fading into the heart, which has less of a tropical floral feel (if there's gardenia, it's no longer noticeable). The dry down has a similar "warm sand and warm skin" feel, but without the creamy sweetness of the original.

It's quite pleasant and summery, and perfectly wearable. It's closer to a unisex, in case you found the original too feminine. Without the coconut and gardenia, it's also lost what I thought of as its raison d'être — I am already well covered, and then some, in terms of summer citrus — but I would guess that it will find its own fans. Still, I'll be surprised if it's going to cause a stir every year in the way that Bronze Goddess has.