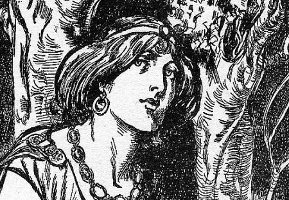 Boadicea the Victorious is one of those perfume houses that I've managed to ignore for a while. It happens to be an easy line to ignore, because it has such limited availability; moreover, something about Boadicea has always irritated me. Maybe it's the cumbersomely large range of scents (does anyone really need to start a new line with forty-plus fragrances?), the strenuous emphasis on "luxury" and "heritage," or the single-adjective fragrance names that are hard to distinguish from one another as well as difficult to read on Boadicea's small, black-on-black labels.

When I finally stopped by Henri Bendel to try a few Boadicea the Victorious fragrances, I was joined by a sales associate who turned out to be well versed in the line. After I had picked up a few bottles, spritzed a few paper blotters, and decided that neither Romantic, nor Inspiring, nor Delicate (which seems like a knock-off of Penhaligon's Bluebell) were making any strong impression on me, the sales associate suggested that I try Exotic. Fragrances with the word "exotic" in their descriptive text rarely appeal to me, and I would not describe myself as "exotic" by any means, but I took the newly sprayed blotter from her and inhaled. Then I tested Exotic on my wrist, and I ended up savoring it for the rest of the afternoon; and when I later got my hands on a sample vial of Exotic, I enjoyed it all over again.

Exotic is not, surprisingly, a tropical white floral or a papaya-and-passionfruit cocktail. The Boadicea website describes Exotic as a composition of African costus, lavender, bergamot, lily, rose, frankincense, musk, and ambergris. Luckyscent has a different set of notes that seems to be based on an earlier press release from Boadicea: musk, black truffle, ylang-ylang, bergamot, blackcurrant, patchouli, vetiver, vanilla tears, and sandalwood. My own impression of this fragrance agrees with certain notes from both lists. I'd classify it as an oriental gourmand: the most distinctive, central accord is a dense, almost earthy (truffle-like?) cocoa note with ginger and patchouli stirred into it. There's an almost astringent bergamot top note that leads nicely into that ginger-chocolate effect; however, I didn't notice any isolated floral notes or any blackcurrant in the heart. The fragrance's base is a spicy-woody vanilla with further hints of patchouli, vetiver, and just a touch of sweetness; it's definitely not a powdered-sugar vanilla like the dry down of L'Artisan Parfumeur Traversée du Bosphore, for example. Exotic has average staying power, although I would have expected a little more tenacity from something at this price point. It could easily be worn by men as well as women. 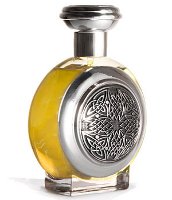 In a recent review of Boadicea's Explorer, Kevin wrote that many people might find that fragrance "too simple…more a perfume base than a fully developed fragrance." I might say the same of Exotic: it's rich and dark, but slightly rough. If Exotic were a textile, it would be a piece of velvet with raw, unfinished edges. If it were a garment, it would be one of the boxy faux-fur vests that are apparently all the rage this winter. I recently wore Exotic on a rainy, blustery day when I had to get a lot of work done and I needed something warm and a bit sweet, but more formidable than a comfort scent, and Exotic fit the bill perfectly. And I do remember liking another Boadicea fragrance, Divine, when it was recommended by that helpful sales associate, so perhaps a second visit to the Boadicea counter is in my future.