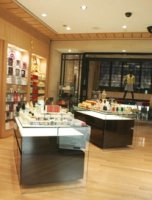 For years, the fragrance department at Henri Bendel was a tempting but awkwardly placed niche at the rear of the crowded main floor. Now it occupies a prime spot on the second level: ascend the curving staircase, and you’ll find its expanded, highly browsable selection. The department is intimate enough to feel comfortable, but large enough to offer a rich variety, balancing classic houses Caron and Chanel, the established niche line L’Artisan Parfumeur (which occupies an entire in-house boutique at Bendel), and small, local company Aroma M Perfumes, to name just a few examples.

This is also the only store in New York that sells Etat Libre d’Orange and Memoire Liquide, two new brands with very different yet equally compelling personalities. Back outside the oasis of the fragrance area, continue to explore the adjacent skincare section and the high-pitched hustle of the cosmetics department downstairs. 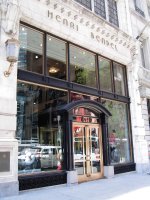 Not to be missed: The historic, decorative Lalique windows, visible from the second and third floors.

Nearby: Henri Bendel is located across the street from Takashimaya (693 Fifth Avenue) and three blocks from Bergdorf Goodman (764 Fifth Avenue). While you’re in the neighborhood, indulge your inner Holly Golightly by window-shopping at Tiffany (5th Avenue at 57th Street).

Update 11/07: Bendel's now has the Scent by Alexis and Juliette Has A Gun fragrance lines.

Update: in 2014, Bendel's stopped carrying any perfume lines other than their own brand name products.