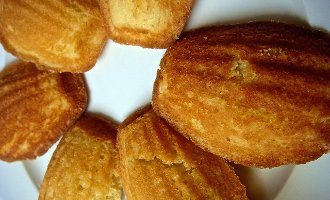 Les Senteurs Gourmandes by Laurence Dumont is one of those lines that often slips my mind for no particular reason. It used to be stocked at Sephora, where I have a hard time concentrating anyway (due to the crowds, the glaring lighting, and the loud music), but it's not there anymore; and when I do spot this brand somewhere else, I briefly wonder, who exactly is Laurence Dumont? and, am I really in the mood for vanilla today? before my attention wanders elsewhere. Well, I actually am in the mood for gourmand fragrances this fall, and now that I've sampled a few fragrances from the line, I've found myself enjoying them.

My current favorite from Les Senteurs Gourmandes is Tendre Madeleine, part of the brand's "Childhood Memories" fragrance family. Tendre Madeleine is described as "sweet, warm, and gourmet, a tempting treat  from morning till night," and its notes are listed as bergamot, cannelle [cinnamon], almond, vanilla, white musk and precious wood. Like many of this line's fragrances, Tendre Madeleine is indeed dessert-inspired, but it's soft and light enough to be wearable in most situations. It begins as a dusting of spice, just as much nutmeg as cinnamon, over a buttery sponge cake. There's a suggestion of candied orange from the bergamot. The almond-marzipan note does have a hint of the so-called "Play-Doh" effect, but that's something I enjoy in small quantities. The vanilla becomes most noticeable on its own in the late dry down.

I haven't tasted an actual madeleine in a while; I do remember the dessert being less spicy than this scent, but perhaps that depends on the recipe. The overall impression is right, because the little madeleine cake is a small indulgence, just a few bites of sweetly simple flavor and texture. This is also a snuggly comfort fragrance; it's neatly blended and stays close to the skin, so that I don't feel like I'm wearing an obvious homage to baked goods. Overall, Tendre Madeleine does bear a resemblance to another fragrance, L de Lolita Lempicka — it has a similar mix of orange, spice, and vanilla — but it sits more easily on me. Something about L de Lolita Lempicka's bergamot-sandalwood combination has always reminded me of a certain small gift shop in Philadelphia's Chinatown, where the smell from a large display of boxed incense sticks made me feel a bit queasy as soon as I entered. Tendre Madeleine seems much gentler and more wearable to me.

I've had fun trying a few other fragrances from Les Senteurs Gourmandes, including Vanille Bourbon and Vanille Chocolat (the latter seems like a lighter take on Angel). The line is nicely affordable, and most of the fragrances would be suitable for any age group, teens and upward, as long as the person has a craving for some sweet notes.

Note: top image is Madeleines [cropped] by SimonDoggett via flickr; some rights reserved.