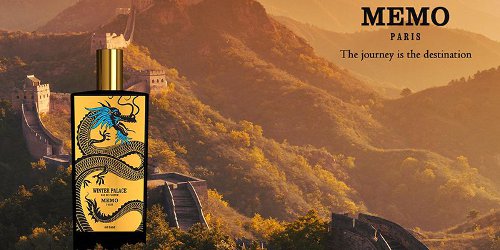 Earlier this month, I dove into the new fragrance line Hermetica. This week I took a step back to revisit Memo, Hermetica's older "sibling" brand, and I sampled two fragrances that I hadn't tried before — one new, one old, both developed for Memo by perfumer Aliénor Massenet.

I'm not actually certain where or what the Winter Palace may be, but the description for this fragrance includes references to the Great Wall of China and to "the awakening of the dragon, imperial." The China back-story definitely comes through in the opening, with its very realistic tea accord accented by a sharp citrus note. The citrus shifts from bergamot and lemon to a softer orange note, and the dry, sweet resin notes come through. In addition to the ones listed, I detect something that reminds of opoponax.

In its dry down, Winter Palace reminds me a little of Maison Francis Kurkdjian APOM Pour Femme, with its mix of orange blossom, incense, and tonka. It skews slightly towards the feminine end of the spectrum, although men who like citrusy orientals should give it a try. I actually want to send the rest of my sample vial to Kevin to see what he'll think of this Memo newcomer; I remember him liking Quartier Latin and Manoa a while back.

Siwa, meanwhile, is a longtime member of the Memo family, dating back to the "Les Echappées" collection of 2007. Its tagline is "Vanilla and Cereal Volutes," which reads strangely, but this description offers some useful details about its Egyptian oasis inspiration: "Narrow ochre and yellow-hued streets, clay lace vestiges, houses with brightly coloured doors. . . The radiant greens of olive trees and palm leaves, the browns and violets of sun-dried dates."

This scent is a powdery gourmand with notes of cinnamon leaf, ginger, freesia, heliotrope, narcissus, orris, incense, sandalwood and vanilla. For a desert-themed fragrance, it doesn't feel particularly "warm," but it isn't "cool," either — it walks an interesting line between temperatures and textures. It starts off wheat-y and flour-y — the "cereal" notes! It turns a little richer and nuttier as it evolves, and there's a sweet punch of heliotrope. The base is vanillic and slightly almondy, with hints of rose and musk. If L'Artisan Parfumeur Bois Farine had a younger cousin who wore more makeup, she'd be Siwa...and if Memo offered smaller bottles, I'd be tempted to add Siwa to my collection. 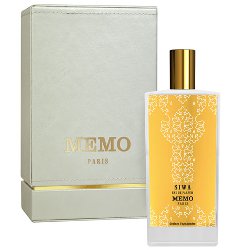 Siwa feels more feminine than Winter Palace; it's comforting yet sophisticated. Both fragrances have above-average staying power on my skin, leaving traces on my wrists even after a long, hot workday. Memo is an extensive range (not to mention a very expensive one), and I almost avoided it for a while because I was overwhelmed by all the options. Now that I'm finding my way into its offerings, both old and new, I'm impressed despite myself.

Memo Winter Palace ($295) and Siwa ($300) are available as 75 ml Eau de Parfum. For purchasing information, see the listing for Memo under Perfume Houses.